CSO says numbers out of work fell by 41,700 in the year to the end of September 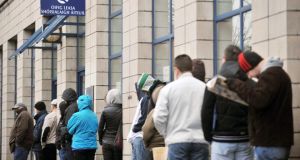 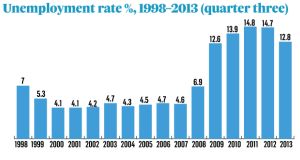 A graphic showing the change in unemployment in the Republic between 1998 and the third quarter of 2013. Graphic: Irish Times studio

The Government has claimed a turnaround in the rate of unemployment is evidence of the strengthening Irish economy.

Figures released by the Central Statistics Office today show that The numbers unemployed fell by 41,700 in the year to the end of September, reducing the total number of people out of work to 282,900.

As a result the seasonally adjusted unemployment rate decreased from 13.6 per cent to 12.8 per cent over the July to September quarter while the number of people unemployed fell by 18,000. This is the fifth quarter in succession where unemployment has declined on an annual basis and has led to the lowest rate of unemployment since 2009.

Taoiseach Enda Kenny said over 1,000 new jobs were being created per week in the economy and there were “positive signs that business confidence is rising”

This compares with an annual increase in employment of 1.8 per cent in the previous quarter.

On a seasonally adjusted basis there were 22,500 more jobs in the economy in the July-September period.

The figures also show a decline in long term unemployment from 8.9 per cent to 7.6 per cent over the year.

“More than 1,000 people a week are returning to work, proof that the measures taken by the Government to stabilise the economy and address the unemployment crisis which we inherited are paying off,” Minister for Social Protection Joan Burton said.

The latest figures follow separate data published by the CSO showing that the Live Register in October fell below 400,000 for the first time in four years.

“Private sector adding 1,200 jobs a week. Very encouraging. Testament to Irish workforce and entrepreneurial spirit. Real base to build on,” he said.

Tanaiste Eamon Gilmore highlighted the decline in the long-term unemployment rate which he said had fallen from 8.9 per cent to 7.6 per cent over the past year.

However, the amount of people classed as long-term unemployed - out of work for a year or more - accounts for 58 per cent of the total - only down about 1 per cent from a year earlier.

Minister for Social Protection Joan Burton said: “There are still far too many people out of work, and tackling unemployment will remain the Government’s number one priority, but these figures demonstrate that we are making steady progress”.