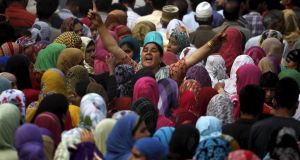 In India, fertility rates are down to 2.48 children per woman. Photograph: Reuters/Danish Ismail

For the past 200 years the global population has risen explosively. There were 1 billion humans in 1850. There are 7.3 billion today. Ever since the Industrial Revolution, humanity has lived in quiet dread that somewhere there is a limit, and the Malthusian horsemen of plague, starvation and war will one day punish our effrontery.

Demographic change is easy to miss, because it happens slowly, but we stand on the cusp of a profound change in the human condition. New projections from the UN suggest that, in a few decades, we could secure a stable global population.

To be clear, the forecasts do not show an imminent end to population growth – far from it. The global population has the momentum of an elephant on an ice rink. The UN’s medium-variant projection shows a rise to 9.7 billion people in 2050 and 11.2 billion by 2100.

But recent data and short-term forecasts also show a dramatic slide in fertility rates. People everywhere are having fewer babies. If the trend continues then, in decades, the global population will flatten out. The UN says there is a 23 per cent chance of that happening by 2100.

The plunge in childbearing is startling. Eighty-three countries containing 46 per cent of the world’s population – including every single country in Europe – now have fertility below replacement rate of about 2.1 births per woman. Another 46 per cent live in countries where the birth rate has fallen sharply. In 48 countries the population will decline between now and 2050.

That leaves just 9 per cent of the world’s population, almost all in Africa, living in nations with pre-industrial fertility rates of five or six children per woman. But even in Africa fertility is starting to dip. In a decade, the UN reckons, there will be just three countries with a fertility rate higher than five: Mali, Niger and Somalia; of these, only Niger will be higher than four.

These projections include a fertility bounce in countries such as Germany and Japan. If more fecund nations follow this path of declining birth rates, a stable population could quickly be locked in.

That would have enormous consequences for the world economy, geopolitics and the sum of human happiness, illustrated by some of the middle-income countries that have gone through a dramatic, and often ignored, fall in fertility.

Consider Iran, for example, where the stereotype of a theocratic state full of families with six children is one reason for the atavistic security fears the country raises. Except it is not true. Birth control campaigns in the 1980s and 1990s led to a plunge in fertility; at 1.75, it has run below replacement rate for more than a decade.

Or consider Mexico. Donald Trump, US Republican presidential candidate, rants about Mexico using the US as a “dumping ground” for violent migrants, but America’s southern neighbour no longer has many young people to export. In the past 40 years, its fertility rate has gone from above six to 2.27, a little over replacement level. There will still be many people eager to migrate to a better life, but they will increasingly come from one place: Africa.

Then there is India, one of the world’s most populous countries, and a primary source of global population growth. Fertility rates are now down to 2.48 children per woman, and the UN projects they will reach replacement level by 2025-30. A similar transition is under way in other big emerging economies, from Indonesia to Bangladesh.

For business, that will mean a huge demographic dividend, as working age populations with spare cash swell in these countries. But it also means the seemingly inexhaustible pool of cheap global labour actually has an end in sight. Countries with falling populations will soon be common. Companies will have to learn to navigate these declining markets.

Finally, the end of population growth almost everywhere else will make Africa a hugely tempting market and manufacturing centre. More than that, lower fertility opens the prospect of tackling extreme poverty, with the chance of an accelerator effect as falling fertility elsewhere frees up resources to help the poorest.

There are several ways this scenario could be wrong. The UN says that bringing about its projected fall in fertility will require investment in reproductive health and family planning in the poorest countries. It would be a tragedy if this investment were not made, given the gains in human happiness likely to result.

Another possibility is that governments resist their citizens’ desire to have few children, whether out of national aggrandisement, fear for the future tax base, dislike of modernity or security fears about more populous neighbours. In rich countries, where fertility is below replacement, this baby boosting is harmless enough. Keeping poor countries on a path of rapid population growth is less benign.

Falling fertility is sometimes seen as evidence of decline – a sign our most dynamic days are past. Perhaps so. But it opens the prospect of a new stage in human existence, one with greater control of our own destiny. The goal should be simple: to let every human on this planet choose how many children they can love and care for. – (Copyright The Financial Times Limited 2015)