Employers broadly positive on other aspects of fiscal plan 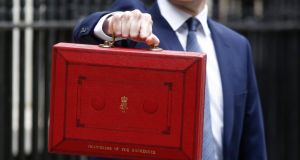 It could be a challenge for some Northern Ireland firms to cope with one of the biggest surprises of the UK’s summer budget – the introduction of a new living wage set at £7.20 from next April – according to key business leaders in the North.

The current minimum wage is £6.50, but yesterday the chancellor George Osborne laid out his intentions to see a living wage of £9 an hour in place across the UK by 2020.

Nigel Smyth, the Confederation of British Industry’s Northern Ireland director said while the business body actively supported a “higher skilled, higher value and higher wage economy”, the introduction of the national living wage at the initial rate of £7.20 would cause concern for local businesses.

He said there were worries that, because of the associated costs to local businesses, it might make some think twice about creating new jobs in Northern Ireland. He said Mr Osborne’s commitment, as stated in his budget speech to give people a “pay rise”, might not reflect businesses’ ability to pay that rate in the North.

“This is taking a big gamble that the labour market can absorb year-on-year increases of an average of 6 per cent,” Mr Smyth added.

But while the living wage may pose a challenge, there were according to the Chartered Accountants Ulster Society, a number of pro-business measures that should help the North. Patrick Gallen, chairman of the society said the decision to establish the annual investment allowance permanently at £200,000 would help business planning to expand.

Mr Gallen said other moves to increase the amount of money people can earn before they pay tax would also be positive in employment terms.

But it is the chancellor’s ongoing campaign to attract new inward investment to the UK by creating a pro-business environment which could have one of the most immediate impacts in the North – particularly in relation to corporation tax.

According to Esmond Birnie, PwC chief economist in Northern Ireland, this move will “significantly” reduce the potential impact of introducing a lower tax rate in the North.

“It will reduce the cost to the block grant, which the government has estimated as £300 million annually,” Dr Birnie stated.

The spotlight on a lower rate of corporation tax in the UK naturally provided a focus for the business community which has once again rallied to appeal to political leaders to work together to deliver the Stormont House Agreement.

Ann McGregor, chief executive of the Northern Ireland Chamber of Commerce said: “The Stormont House Agreement must be implemented in full and the ongoing political instability and slow decision making in Northern Ireland must end. Deferring decisions such as the ‘date and rate’ for lower corporation tax is impacting negatively on business confidence and could result in lost inward investment opportunities.”

Although the issues of welfare reform remain a stumbling block in the North, there are some hopes that austerity cuts might not be as dramatic in as short a space of time as once feared. Richard Ramsey, chief economist NI, Ulster Bank said it looks as though the huge public expenditure cuts forecast in March for the next two years will not be as steep as projected.

“There is now £84 billion more in departmental spending than was forecast in March. For perspective, this would be enough to fund Northern Ireland’s entire public spending for almost four years. It should be noted though that this doesn’t mean there is more public spending being made available; it is simply that the cuts will not be as severe as forecast,” he said.

But Mr Ramsey warned that the £12 billion package of welfare spending cuts announced in the budget will hit hard in the North.

“Overall, all the welfare spending announcements unveiled will impact on Northern Ireland disproportionality due to its reliance on welfare spending. In turn, this will have adverse effects on consumer spending, impacting, for instance on the retail sector,” he said.

According to Angela McGowan, chief economist at Danske Bank, the welfare reforms will have a widespread effect on the local economy.

“Those people who are employed but still live in social housing will see their rent increase to the private sector equivalent and those on Sickness Benefit will have their benefits reduced to the equivalent payment made to Job Seeker’s Allowance.

“Northern Ireland has around 18 per cent of households receiving child tax credits relative to 13 per cent in the rest of the UK. In addition, the local economy has a higher proportion of young people in our population, so the New Youth Obligation and the removal of grants for students from low income backgrounds will have a disproportionate effect,” she warned.

1 Why are markets booming when a crash is on the way?
2 How much do Irish people earn? And what will Covid-19 do to our wages?
3 Drumcondra credit union collapses as merger plan fails
4 Government deficit balloons to €5.3bn on back of Covid spending
5 Could your old car be giving away all your secrets to its new owner?
6 Permission sought for €150m film and media campus in Wicklow
7 Dunnes Stores trials online ordering from Cornelscourt outlet
8 Innovation hubs keen to get show back on the road
9 Irish travel-tech company Rove raises €450,000 in seed funding
10 Vodafone to speed up 5G rollout using new technology
Real news has value SUBSCRIBE