Three firms to create more than 120 jobs across Ireland 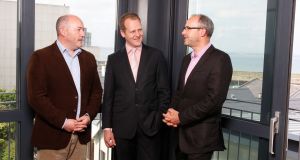 Ian Dodson, Ken Fitzpatrick and Anthony Quigley of the Digital Marketing Institute (DMI), which has announced the creation of 34 new jobs

Three firms are to create over 120 jobs across the island of Ireland, it was confirmed on Thursday.

The Digital Marketing Institute (DMI), which is based in Dun Laoghaire, has said it is creating 34 additional roles this year.

The latest jobs announcement is the result of continuing strong international growth, which saw 86 per cent growth in revenue across its core business in 2015. Turnover meanwhile has trebled in the past three years.

Elsewhere, O’Brien Fine Foods is promising 40 new roles as part of a €14 million expansion at its facility in Timahoe, Co Kildare.

The company, which produces cooked meats under the Brady Family and Rudds brand names, is planning a 8,000 sq m expansion at its premises in a move which is expected to more than double operational capacity.

It said it intends to bring the total numbers of employees at the plant to 310 from 270 over the next two years with a further 150 jobs expected to be created during the constructin phase. The company also employs 55 people at a facility in Birr, Co Offaly.

The expansion at Timahoe is supported by the Department of Jobs, Enterprise and Innovation through Enterprise Ireland.

In the north, smart payments firm Cayan has said it is to create 50 new jobs in Belfast. The Boston-headquartered company first set up operations in Northern Ireland in 2013 and it currently employs 134 staff.

1 Irish people like nothing more than being bribed with their own money
2 Being in Nama regarded as stigma in UK, O’Flynn tells court
3 Hogan warns Britain on US trade deal as EU set to impose tariffs
4 Greencore investors urged to spurn Coveney’s €315,000 pension
5 Climate apathy in Northern Ireland could impact on the Republic
6 EU considers five-year ban on facial recognition tech in public areas
7 Ministers ditch Davos for electorate’s doorsteps
8 Construction body calls for loan scheme to help first-time buyers
9 The Irish economy is thriving but if you’re not feeling it – here’s why
10 Barclays to cut 100 senior roles as lender seeks to rein in costs
Real news has value SUBSCRIBE