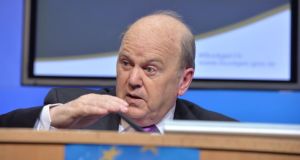 The Government is to relax the rules governing a special tax incentive scheme to attract foreign executives into Ireland after just 31 individuals availed of the scheme last year.

The move, contained in the Finance Bill published today by Minister for Finance Michael Noonan, is seen as another incentive to drive foreign direct investment here after the removal of the “Double Irish” tax loophole.

The Special Assignee Relief Programme (Sarp), originally brought in 2012, reduces the cost to the employer of bringing in high-paid executives or key decision makers from abroad in the hope they will further cement the company’s presence here.

Under the original rules, an employee was able to make a claim to have 30 per cent of their income between €75,000 and €500,000 disregarded for income tax purposes.

However, after a low take-up rate in its first two years of operation, Mr Noonan plans to remove the €500,000 cap, making it significantly more lucrative for highly paid individuals to work here. The scheme is also to be extended until at least the end of 2017.

The Finance Bill gives legal effect to the various taxation measures announced in the budget, including the reduction in the top rate of income tax from 41 per cent to 40 per cent as well as changes to the entry thresholds for Universal Social Charge.

The Bill also amends the State’s company tax residency rules to ensure all companies incorporated in Ireland will automatically be tax resident here, essentially closing the “Double Irish” mechanism for new entrants from January 1st next.

One of the other corporate tax measures announced in the budget was the possible establishment of a “knowledge development box” that will grant tax exemptions to companies developing new technology in the country.

There was no mention in the Bill of the proposed tax rate that might be associated with the box as the establishment of the scheme is still subject to a public consultation process.

Among the other provisions contained in the Bill was the abolition of VAT charged on green fees in member-owned gold clubs. This follows a ruling by the European Court of Justice (ECJ) which found that levying VAT when non-members pay green fees was not in line with EU law.

The Bill also includes amendments to close off a number of tax avoidance schemes which are linked to the use of Approved Retirement Funds and “vested” Personal Retirement Savings Accounts.

The Government also took the opportunity to widen the definition of tea, for the purposes of a zero VAT rate, to include herbal teas and other fruit infusions.

The tax relief on the purchase of new hybrid electric vehicles, due to run out on December 31st, has been extended until the end of 2016. The relief is up to €1,500 on new hybrid vehicles, which must be in series production. Plug-in hybrids - which can run exclusively on electric-only power over distances of up to 50km - qualify for a grant of up to €2,500.