Stamp duty relief for farmers to be part of Finance Bill

Special 1% rate applies to transfer of land within families, with age restriction abolished 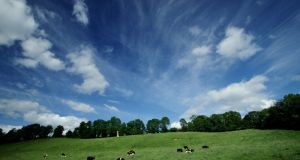 The Finance Bill will include the extension of an existing tax relief to cover most transactions taking place within families. Photograph: Getty Images

A stamp duty tax relief aimed at farmers is to be extended in the wake of controversy over the hike in commercial stamp duty in the budget. Stamp duty on commercial transactions, including agricultural land, was increased from 2 per cent to 6 per cent in the budget as a key fund-raising measure.

Following criticism from the farming industry, the Finance Bill, due for publication on Thursday, will include the extension of an existing tax relief to cover most transactions taking place within families. However, the new higher rate looks set to continue to apply to other land transfers.

Under an existing provision, a special rate of 1 per cent applies to transfers of farmland within families, provided the owner selling or gifting the land is under 67. This age provision was designed to provide an incentive to farmers to pass on land at a younger age, offering a rate that was half the previous 2 per cent.

The age restriction is to be abolished as part of the Finance Bill, meaning the special rate – known as consanguinity relief – will apply even when the existing owner is older, provided certain other conditions are also met. This follows discussions between Minister for Finance Paschal Donohoe and Minister for Agriculture Michael Creed.

Among the conditions that must be met are that the individual to whom the land is conveyed or transferred must either farm the land or lease it for a period of not less than six years to an individual, who farms the land. There is also a requirement that the person taking on the land must have an agricultural qualification.

This relief had been due to run out in 2018, but was extended in the budget for another three years. It is understood that the abolition of the age limit will be re-examined towards the end of 2020, when the relief itself is due for review as the three-year extension runs out.

An existing relief, offering a complete stamp duty exemption in cases where land is transferred to a qualified farmer under 35 years of age, remains in place.

The property industry will also closely watch the terms of the transition arrangements for the imposition of the new commercial stamp duty. It is expected that the Finance Bill will signal that for deals signed before midnight on budget night, the old 2 per cent rate will still apply.

The Bill puts into law the tax changes announced in Budget 2018 last week. It is generally subject to amendment in its passage through the Oireachtas.

Among the other issues that will come into focus will be the change in tax rules for multinationals claiming relief in relation to investment in intellectual property.

The Government said in the budget that it would raise more money in the short term from the multinational sector by limiting the use of a key tax allowance related to the transfer of intellectual property to Ireland.

The movement of intellectual property to Ireland was a key factor behind the huge jump in Irish GDP in 2015.