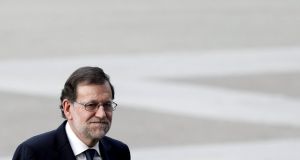 Spain’s acting prime minister Mariano Rajoy is planning to implement new austerity measures if he remains in government after a June election, in a bid to avoid a European Commission sanction for failing to control the public deficit.

Spain’s acting prime minister Mariano Rajoy is planning to implement new austerity measures if he remains in government after a June election, in a bid to avoid a European Commission sanction for failing to control the public deficit.

“In the second half of the year, once there is a new government, we are prepared to adopt new measures,” it said.

That pledge contradicts public statements by Mr Rajoy, a conservative, who on the campaign trail has ruled out further austerity and even promised tax cuts if he is returned to power after the June 26 election.

Mr Rajoy’s Popular Party (PP) won an inconclusive election in December but it lost its congressional majority and was unable to form a new government. With no other party managing to do so either, the June vote will attempt to unblock the political stalemate. In his letter to the EC, the acting prime minister cites a “complex political context”.

Mr Rajoy is expected to win again next month, but he would almost certainly require the support of at least one other party in order to remain in power.

Spain’s plea seems to have had some effect. Last week, Economic Affairs Commissioner Pierre Moscovici said it was “not the right moment economically or politically” to sanction Spain as the EC announced that an anticipated decision on action regarding the country’s deficit would be delayed until July.

Spain has failed to meet its EU-agreed deficit targets for each of the four years Mr Rajoy has been in power. In 2015, the deficit was 5.1 percent of GDP, compared with a 4.2-percent target, making Spain liable for a fine of up to 2.1bln.

The longstanding and oft-delayed aim has been to bring the shortfall under 3.0 percent of GDP. The Commission has given Spain an extra year -until 2017- to do so. Madrid now hopes to avoid the financial burden and embarrassment of a fine.

Highlighting the efforts his government has already made in terms of structural reforms and savings, Mr Rajoy told Mr Juncker: “It would not be a good precedent to penalise in the same way those countries which reform their economies as those which do not.”

The revelations about the government’s commitment to further austerity this year have drawn criticism.

“Rajoy says one thing in Brussels and quite another in Spain,” said Socialist Party leader Pedro Sánchez, who has himself promised to request two years’ grace from the EC in order to meet the 3.0-percent deficit target if he becomes prime minister.

The government’s efforts to slash the deficit in recent years have been deeply unpopular. Spanish foreign minister José Manuel García-Margallo appeared to criticise Brussels’s budgetary demands earlier this month when he said “we have gone to far with austerity”, before later claiming he was talking about Europe as a whole and not Spain.