Probes since 2001 into offshore accounts include €4.6m from Irish HSBC customers 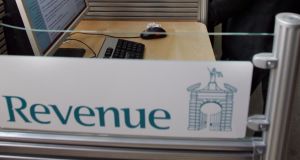 Revenue’s Offshore Assets Group undertakes investigations into possible tax offences arising from offshore bank accounts held by Irish residents. Some €9.21 million was collected by Revenue in 2014 from this unit’s work, down from the €14.87 million it gathered in the previous year.

The Revenue Commissioners has collected just more than €1 billion since 2001 from various special investigations of offshore bank accounts held by Irish residents. This includes the €4.6 million received to date from the holders of offshore accounts with HSBC Bank in Switzerland, revealed recently by The Irish Times in the Swiss Leaks investigation by media groups across Europe.

Revenue’s Offshore Assets Group undertakes investigations into possible tax offences arising from offshore bank accounts held by Irish residents. Some €9.21 million was collected by Revenue in 2014 from this unit’s work, down from the €14.87 million it gathered in the previous year.

The highest yield was in 2004 when €562 million was collected from investigations into accounts held by the offshore subsidiaries of 10 Irish financial institutions, including units in Jersey and the Isle of Man.

Revenue had initiated its investigations into these accounts in 2003, when it netted €150 million in unpaid taxes, interest and penalties from offshore accounts. Since the economy crashed, the highest amount collected by the Revenue’s offshore unit was €29 million in 2008.

These figures emerge from answers given by the Minister for Finance Michael Noonan to questions from Michael McGrath, Fianna Fail’s finance spokesman, and Finian McGrath, an independent TD in Dublin.

On the issue of the HSBC accounts, Mr Noonan said the issue first came to light in December 2009 when the French authorities became aware of these offshore funds.

“The Revenue Commissioners wrote to the relevant French fiscal authorities in March 2010, when they became aware that the French Government may have obtained information in relation to bank accounts held with HSBC Bank in Geneva,” he said.

“That communication expressed an interest in any such information which related to Irish residents, and requested that the French authorities exchange this information under the provisions of the Ireland/France Double Taxation Agreement and EU Mutual Assistance arrangements.”

In 2010, the French authorities provided details to Revenue of bank accounts held with HSBC in Geneva that had links to Irish nationals or to addresses in Ireland.

Mr Noonan said Revenue has initiated 33 investigations as a result of the data received. Some 20 settlements have been made, of which four were by “legal entities”.

“The total amount recovered to date as a result of these investigations and subsequent settlements is €4,556,872, while a further €174,442 has been received as payments on account in two ongoing investigations,” he added.

Mr Noonan told the deputies that Revenue also took criminal prosecutions in relation to the HSBC accounts. “To date, three persons have been convicted of such offences and fines ranging from tax €4,000 to €25,000 have been imposed by the courts. A further case remains under criminal investigation.”