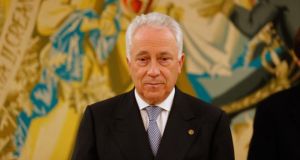 Bank of Portugal governor Carlos Costa arrives to read a statement in Lisbon yesterday. Portugal’s central bank said it had decided to rescue troubled lender Banco Espirito Santo in a €4.9 billion euro recapitalisation to be pumped into the healthy part of the bank. Photograph: Hugo Correia/ Reuters

The rescue of Banco Espirito Santo, which was unveiled after a frenzied weekend of discussions between Portuguese and European Union officials, comes after weeks of increasingly bad news about the financial state of the lender, particularly its exposure to a cascade of companies headed by its founding Espirito Santo family.

Under the plan, Banco Espirito Santo, or BES, will be split into a “good bank”, renamed Novo Banco, and a “bad bank”, which will house BES’s exposures to the troubled Espirito Santo business empire as well as its Angolan subsidiary.

The bad bank’s losses will be born by the bank’s junior bondholders and shareholders, including the Espirito Santo family, which has a 20 per cent stake, and French bank Credit Agricole which owns 14.6 per cent.

Novo Banco, or New Bank - will be recapitalised to the tune of €4.9 billion by a special bank resolution fund created in 2012.

The Portuguese state will lend the fund €4.4 billion.

All of BES’s depositors will be protected as well as the bank’s senior bondholders.

Portugal’s central bank, which only days ago said that BES could be recapitalised by private investors, said the plan would involve no cost to the public purse because the loan would be temporary.

The Bank of Portugal expects the state to be reimbursed when Novo Banco is eventually sold to private investors.

“The plan carries no risk to public finances or taxpayers,” Carlos Costa, the central bank governor, told reporters in a late night news conference in Lisbon.

The bailout is a setback for Portugal just months after the country emerged from a €78 billion, three-year bailout financed by the European Union (EU) and the International Monetary Fund (IMF).

Portuguese bond yields rose to 3.78 per cent on Friday on expectations Lisbon would have to rescue BES.

However they were still far below rates of more than 15 per cent seen in 2012, when there were serious doubts whether the eurozone would be able to survive a brewing debt crisis.

The rescue, which comes a year after Greece spent €28 billion to rescue four of its banks, suggests that despite years of efforts to improve the euro zone’s financial and economic management, hidden problems still may lurk in the region’s banking systems.

The European Central Bank is currently scrutinising the books of the bloc’s largest banks before it takes over direct supervision of them in November.

The Portuguese government loan for the BES rescue will use up a large chunk of the €6.4 billion left over from a fund earmarked to aid the country’s banks as part of its EU/IMF bailout.

In a statement, the European Commission said the resolution plan complied with its rules on state aid.

BES’s shares dropped 75 percent last week and Mr Costa said the bank lost access to Eurosystem liquidity after it reported a record net loss of €3.58 billion due to its exposure to a web of Espirito Santo companies.

BES not only provided loans to the companies, it also sold billions of euros of their debt to its customers.

The spin-off of the healthy parts of BES, a household name in much of Portugal, is an attempt by authorities to shield the bank from the escalating troubles of its founding family.

Much of the Espirito Santo group, whose activities include tourism, health and agriculture, have sought bankruptcy protection in past weeks in a remarkable fall from grace of one of Europe’s most prominent business clans.

The bank’s new management - put in place by the central bank as a result of the Espirito Santo turmoil - has said it had found new, hidden commitments made by the bank to family companies as late as June.

Management said it suspected illegal behaviour had taken place at the lender.