Politics, not economics, underpins the euro 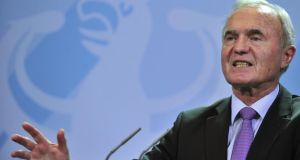 Otmar Issing, former ECB chief economist: claims that everything would be fine if everyone balanced their budgets and stopped asking for bailouts. Photograph: John MacDougall/AFP

An interesting open-air debate has erupted between current and ex-members of the ECB governing council over what to do next. A motley collection of hard-line academics and assorted hangers-on have joined the argument, probably because of alarm over the tone of that debate.

One group of luminaries this week called for France and Germany to simultaneously exit the euro and re-establish the franc and the deutschemark. They warned, however, that “a period of monetary uncertainty, as European economies adjusted to the new environment, would be unavoidable”. Bless them.


‘Weidman moment’
Meanwhile, some hedge fund types are already describing a potential outbreak of economic reality in policy circles as Europe’s “Weidman moment”, a reference to the Bundesbank’s top official who this week astonished everyone by seemingly opening the door to quantitative easing (QE), better known as money printing.

Simultaneously, Otmar Issing, the former ECB chief economist, penned a petulant piece in the Financial Times , demanding that everybody stop blaming Germany for Europe’s woes. He claims that everything would be fine if everyone balanced their budgets and stopped asking for bailouts.

This, of course, ignores the fact that, in the run-up to the crisis, the only country breaking the rules was Greece. Spain, Portugal and Ireland were not in breach of any euro-related rule. Issing seems to think that the only time cross-border bailouts should be allowed is after, not before, political union. Banks have to be cleaned up by national authorities, not the German taxpayer. Issing fails to mention that telling near-insolvent governments to “clean up” their banks amounts to a demand for further recapitalisation. Where that money is supposed to come from is left to our imagination. So the banks remain a mess.

Moreover, his vision of how a monetary union is supposed to work makes little sense. When economies are hit with things like a financial crisis, something has to bear the burden of adjustment. His rules leave zero scope for the traditional roles played by fiscal and interest rate policy; the existence of the euro, by definition, means that the exchange rate policy lever is also ruled out. The only thing left that can adjust is, therefore, the economy itself.

And that has adjusted – GDP and employment have been the default shock absorbers. This is unsustainable. If, say, the situation in Ukraine derails Europe’s feeble recovery, the euro will be toast.

Of course, Issing makes no mention of the fact that the biggest rule breaker today is the ECB itself: consistently failing to hit an inflation target is as big a breach of the monetary rules as can be imagined.

Another ex-ECB heavyweight, Lorenzo Bini Smaghi, weighed into this debate with an almost Jesuitical argument that tried to distinguish between what the ECB has done and what it might now do. Up until now, the way in which ECB chief Mario Draghi has bought government bonds has been extremely suspect, according to Bini Smaghi. But QE, as practised in Britain and the US, would be perfectly fine.

His point is a subtle one: buying Irish bonds to help Ireland is against the ECB’s mandate. Buying Irish bonds (or any bond) to hit your inflation target is acceptable. I look forward to seeing him argue that one before the German constitutional court.


Monetary hawks
It seems that a generation of monetary hawks have discovered pragmatism. They have noticed that Europe’s growing balance of payments surplus and slide into deflation is straight from the Japanese playbook of the last 20 years. The older generation has launched a fightback.

The stakes are high. It may just be a key moment. The events in Ukraine have served as a timely reminder of why the EU exists and what the euro is really for.

It’s never been about economics, it’s always been high politics. Vladimir Putin may have brought a coherence to European thinking and policies that recession and high unemployment could never achieve.