‘Megabrew’, a bumper crop of Christmas trees and the robot revolution 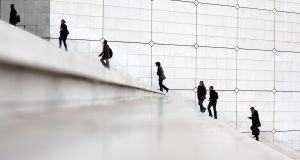 Commuters make their way to work in the La Défense business district in Paris on Monday. Photographer: Simon Dawson/Bloomberg

Image of the week: La Défense

This stark image is of commuters making their way to work in the La Défense business district of Paris on Monday, three days after terrorist attacks killed 129 people. Parisians have moved about their city under the gaze of both armed police and an additional 1,500 soldiers who were deployed to the streets in the wake of the attacks. Some companies told employees they could work from home on Monday, while those who carried on as normal encountered train terminals dotted with machine gun-toting security officials and large-screen messages urging them to dial an emergency number should they notice any suspicious behaviour. Unnerving times. (Photograph: Simon Dawson/Bloomberg)

Christmas trees that will be harvested between this week and early December by about 80 Irish growers. Some 350,000 of them, mostly of the Nordmann Fir and Noble Fir variety, will be sold in Ireland, with the rest destined for export.

Years it can take before an Irish-grown tree reaches peak condition and becomes ready for harvesting, says the association. This year it has launched a buy-Irish campaign called “Love a Real Tree”. You can’t really hug a Christmas tree, though, can you?

All parties are best advised to stay sober for now, as the deal will have to clear several regulatory hurdles before this Megabrew mega-monster can officially become a thing. But how mega would it be? The final bid by Belgian-Brazilian AB InBev for London-listed SABMiller clocks in at £71 billion (€100.5 billion), a price that puts this deal on track to become the biggest in British corporate history and the fourth biggest in the world ever. Between them, Budweiser-maker AB InBev and SABMiller produce more than a third of the world’s beers.

So it’s mega enough, then, to make the likes of Heineken and Molson Coors look like minnows.

Getting to know: Andy Haldane

The robots are coming, warns Andy Haldane, chief economist at the Bank of England, who estimates that some 15 million jobs in the UK alone are at risk from developments in automation, or the robot revolution as it’s otherwise known. The set of human skills that machines can reproduce at lower cost “has both widened and deepened”, he says – though presumably “chief economists” are still safe.

There’s a caveat: “To bring that down to planet earth, no one any time soon is, I think, going to choose a robot to cut their hair,” he added. Haldane (48), who sports quite a close hair cut himself, is one of the top 100 most influential people in the world, according to Time magazine, which is mercifully yet to compile its list of the top 100 most influential robots.