This week: a roaring retail Tiger, the ‘gold referendum’ and notorious shopping days 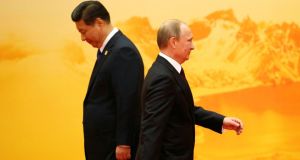 Image of the week: Go east

Russian president Vladimir Putin walks past his Chinese counterpart Xi Jinping at the Asia Pacific Economic Co-operation (Apec) forum in Beijing. However, although this picture makes it seem like they are pretending not to notice each other in a manner that would spell diplomatic doom, they had in fact just shaken hands. While his relationship with the West

appears to deteriorate by the day, Putin is busy cementing his relationship with Russia’s eastern neighbour via massive gas supply deals and other friendly overtures. Perhaps Russia could throw

some of those popular Putin T-shirts on sale in Moscow

into the bargain. Photograph: Reuters/Kim Kyung-Hoon

Getting to know: Angus Thirlwell Angus Thirlwell is the co-founder and chief executive of upscale confectionery manufacturer and retail chain Hotel Chocolat, but apart from spreading the joy of creatively presented chocolate, he also knows how to tell a story. Hotel Chocolat’s efforts to expand into the US a few years ago didn’t quite go according to plan, he revealed this week, as its consignment of Champagne truffles was seized by the US Food and Drug Administration and quarantined under explosives/dangerous liqueurs legislation. There was just too much Champagne in them. Curiously, the whisky truffles made it through fine. Thirlwell also admits he seldom stops thinking “about all things chocolate-related”; in fairness he has the perfect excuse for that.

The list: Notorious shopping days Some retail days are busier than others. Here, in chronological order, are five days where either physical or virtual tills ring incessantly.

2 Black Friday The media gets morbidly excited each year by the prospect of customer stampedes on Black Friday, the US shopping fest that takes place the day after Thanksgiving.

3 Cyber Monday The Monday after Black Friday isn’t actually the biggest online shopping day in the US – that comes later – but it’s a nice marketing wheeze all the same.

5 Boxing Day Yes, it’s St Stephen’s Day in Ireland, but over the Irish Sea, Boxing Day is traditionally the time when British people, brainwashed by the spell-breaking furniture sale ads that pop up in ITV’s Christmas Day breaks, duly head to their local furniture warehouse to pick up a leather sofa. Apparently.