Motor insurance costs up 30% in year to January

Prices were on average 0.1% higher last month versus the same period in 2015 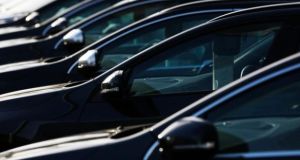 Motor insurance costs have soared over the past year, new figures show

Motor insurance costs rose 30 per cent in the year to January, according to new figures from the Central Statistics Office (CSO).

The latest data show prices on average were 0.1 per cent higher last month compared to January 2015, but down 0.8 per cent versus December.

The most notable changes over the year were increases in miscellaneous goods and services, which increased 4 per cent on the back of the rise in motor insurance costs. Education costs rose by 3.8 per cent on an annual basis, while communication and restaurant and hotels prices were up 1.7 per cent and 1.5 per cent respectively.

In the year to the end of January, clothing and footwear costs fell by 4.1 per cent, while transport prices declined 2.5 per cent. Other notable decreases in costs were recorded in the furnishings, household equipment and maintenance category, which was down 1.6 per cent, and food and non-alcoholic beverage costs, down 0.9 per cent.

On a monthly basis, prices fell by 0.8 per cent versus December with a 10.2 per cent decline in clothing and footwear prices due to the January sales.

Furnishings, household equipment and maintenance costs declined 2.3 per cent in January while transport costs were down 2 per cent.

During the month, alcohol and tobacco-related costs increased 2.9 per cent while miscellaneous goods and services rose 0.4 per cent.

“Despite the booming Irish economy, inflationary pressures as measured by the Consumer Price Index (CPI) are in our view likely to remain fairly well contained in the immediate future, mainly because of lower oil prices. But the cost of services like insurance and education look set to continue to rise,” said Mr McQuaid.

“At this juncture we are looking for only a modest overall increase of 0.3 per cent in the CPI in 2016, with the services sector the main source of upward pressure,” he added.