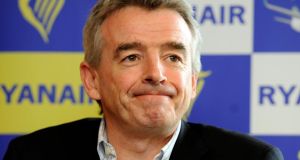 Michael O’Leary is to attend the secretive Bilderberg conference.

Ryanair chief Michael O’Leary takes his place among the chieftains of the world on Thursday when the secretive Bilderberg conference gathers in the Austrian alps for a three-day discussion on global affairs.

The Bilderberg conclave at Telfs-Buchen takes place only 50 kilometres from where the Group of Seven summit concludes today over the German border at Elmau Castle, Bavaria.

If the number of people at the G7 is strictly limited, the Bilberberg meeting is a much larger affair with 140 participants this year. In the power stakes of the global elite, however, the gathering carries a turbo charge all of its own.

Critics say this is the shadowy forum which really rules the world, their complaints amplified by the fact that no minutes are taken, no report made, no written, no resolutions proposed, no votes taken and no policy statements issued. But defenders say that’s way over the top, that this is a simply a private meeting for informal discussions about major issues facing the world and no more than that.

Either way, a legion of chief executives and chairmen from international commerce will mingle with leaders from the political, central banking, military, intelligence and academic worlds, a handful of media strays – and one royal.

Mr O’Leary is one of two Irish attendees, the other being long-time Bilderberg member Peter Sutherland, outgoing chairman of Goldman Sachs International and UN special representative on migration.

The prime ministers of Belgium, Finland and the Netherlands are attending, likewise the president of Austria, and also princess Beatrix of the Netherlands.

General secretary of Nato, Jens Stoltenberg , will be in attendance; so too is US special envoy to for the global coalition to counter Islamic state John Allen; former director of the Central Intelligence Agency David Petraeus; and director of the Danish intelligence service, Thomas Ahrenkiel.

Amid rampant uncertainty over the fate of Greece, two key figures in the drama will be there: Dutch finance minister Jeroen Dijsselbloem, president of the group of euro zone finance ministers; and Benoît Coeuré, French executive board member of the European Central Bank.

Another high-level figure at the gathering is Laurence Boone, a special adviser on financial and economic affairs to the French president.

So too is Klaas Knot, chief of the Dutch central bank and an ECB governing board member .

British chancellor George Osborne will also be there, so too his putative successor Ed Balls, the former shadow chancellor who lost his Westminster seat in the election one month ago. Other “formers” in attendance include hawkish former US officials Henry Kissinger and Richard Perle.

Mr O’Leary’s entrepreneurial career may have started with his purchase of a newsagent in Walkinstown but the business crowd at Bilderberg is far from the realm of the corner shop.