Ireland will be important gateway to EU for US companies after Brexit, says law firm 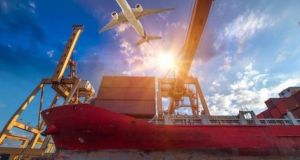 “We believe that many US companies seeking to navigate access to the European market post-Brexit will see an even greater role for Ireland.” Photograph: Getty Images

Ireland will become an even more important gateway to EU markets for US companies in the wake of Brexit, according to law firm Matheson.

“The substance behind the Irish-US trade and investment relationship is set to drive an even stronger flow of business between the countries over the coming years,” Michael Jackson, managing partner of Matheson, told members of the American Chamber of Commerce Ireland.

Mr Jackson said that despite uncertainty around global trade policy and US tax reform, as well as the challenges posed by Brexit, the US trading relationship would remain strong.

Matheson works with companies and financial institutions doing business in and from Ireland.

Ireland had a long record of providing legal and regulatory certainty, tax certainty and access to European markets, Mr Jackson said at the Chamber of Commerce’s annual lunch in Cork. These were all factors which were “essential” for international business, he said, adding that Ireland remaining as a member of the EU and committed to a low corporation tax rate were also factors.

“We believe that many US companies seeking to navigate access to the European market post-Brexit will see an even greater role for Ireland, and that the current substantial numbers of people employed in Ireland by US companies will ultimately increase,” said Mr Jackson.

He said there were also currently 700 Irish companies employing over 80,000 people in the US, something which “is often forgotten”.

“Those numbers confirm that the US-Irish trade relationship is a substantive one based on free trade with opportunities for both sides. Free, fair and open trade based on substance and shared opportunity offers a credible, sustainable path to long-term growth and prosperity.”

1 Should my mam wait for house prices to drop before buying?
2 Two prominent business leaders in planning row with neighbour
3 Cheers: Conor McGregor's whiskey races up the sales chart
4 Coronavirus: Big majority ‘uncomfortable’ returning to everyday activities
5 ‘I’m so lucky to be in the Caribbean – a million miles from Derry Girls’
6 Hard-hit SMEs get ‘paltry’ €11m worth of loans under State scheme
7 Minister calls on EU to act against tobacco firms ‘undermining’ menthol ban in Ireland
8 Why we’re about to learn if we are really in the A-team
9 Tobacco makers still trying to make a mint from Irish menthol market
10 Michael Smurfit: ‘I asked Trump to invite me to the White House for my 80th birthday’
Real news has value SUBSCRIBE