Living with a bear market

Declining stocks are part and parcel of market reality. What lessons can we learn? 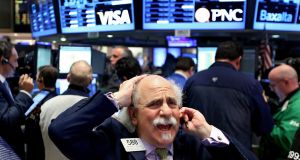 Global stocks have now fallen into bear market territory. Should investors be spooked, or are market downturns simply part and parcel of investing? How low can stocks go during bear markets? Are active funds a better bet?

In most other respects, there is nothing remarkable about the recent declines. Michael Batnick of Ritholtz Asset Management notes that, historically, stocks have suffered average intra-year declines of 16.4 per cent, with almost two-thirds of years witnessing double-digit corrections. In more than half of those cases, the S&P 500 nevertheless recorded annual gains.

Stated differently, adds Batnick, 36 per cent of all years saw a double-digit decline and still finished positive. Bear markets – declines of at least 20 per cent – happened in more than a quarter of all years.

In other words, recent action may have been ugly but it does not represent a crash or a meltdown. Drawdowns and bear markets are part and parcel of the investing process, not freak events. Stocks have historically delivered superior long-term returns but, as Wall Street Journal columnist Morgan Housel tweeted recently, volatility is the price of admission, and it is a price you must pay if you want to get the returns.

Slightly different definitions are used by other firms, resulting in different averages being bandied about by different strategists. S&P Capital IQ, for example, estimates that, since the second World War, bear markets have lasted an average of 14 months, with stocks losing roughly a third of their value.

However, the duration and severity of bear markets can vary wildly. The two most recent bear markets – between 2000 and 2002 following the bursting of the dotcom bubble, and the 2007-2009 global financial crash – were more severe than anything seen since the 1930s, with stocks more than halving on both occasions.

Other bear markets have been more modest affairs that ended within months.

Double-digit declines are not uncommon during non-recessionary periods, but they tend to be brief affairs that trigger little damage compared to that seen during stressed economic circumstances.

Despite growing fears regarding a global economic slowdown – the MSCI World Index is already in bear market territory – the odds of a US recession appear slight at the moment. Bloomberg’s latest monthly survey of economists, for example, estimates the median probability of a US recession over the next year to be at 19 per cent. Strategists at Bank of America Merrill Lynch and Morgan Stanley also estimate recession odds to be about 20 per cent.

Declines are not bad for (most) pensions

This might be true of someone nearing retirement age, but it’s certainly not true of someone who is a decade or two away from that particular milestone. Yes, global stocks have lost about 20 per cent of their value since peaking last April. Another way of putting this would be to say that the number of shares acquired in your latest pension fund contribution has increased by 20 per cent.

Younger people paying into pension funds will be buying stocks over the next few decades. Like any purchase, you should want to buy when prices are low, not when they are high. Despite this, most people, as Warren Buffett once noted, are “elated when stock prices rise and depressed when they fall”.

In truth, most pension funds owners should hope for years of declining or stagnating stock prices; higher prices are good when it’s time to sell up, but not when your investing career is in its relative infancy.

The report – The Active-Passive Debate: Bear Market Performance – noted that performance was inconsistent. For example, although 60 per cent of US funds outperformed between 2000 and 2003, only 23 per cent of European funds did so. Furthermore, the best-performing funds failed to replicate their success going forward. Vanguard notes 21 out of 37 funds analysed beat European indices during the 1990 bear market, but only seven managed to repeat that performance during the 1992 downturn. That number continued to drop following the 1994 and 1998 bear markets; by the 2000 bear market, none of the original 21 outperformers were still in the winning group. In the US, just 11 per cent of the funds analysed outperformed in all six bear markets.

The stats indicate investors should not assume active funds will protect them in times of trouble, with one exception – a “significant percentage” of large-cap value funds outperformed the overall market during each US bear market, notes Vanguard.

Declines can be scary

The point is, it’s easy to underestimate how scared you will feel during big market declines. To quote Fred Schwed, author of the 1940 classic Where are the Customers’ Yachts?: “There are certain things that cannot be adequately explained to a virgin either by words or pictures. Nor can any description I might offer here even approximate what it feels like to lose a real chunk of money that you used to own.”

1 The wealth of the Irish – how do your assets match up?
2 KBC Ireland fined €18.3m for ‘unconscionable’ tracker scandal role
3 Will Facebook walk away from European market after data protection 'hissy fit'?
4 Irish company to test vaccines on volunteers deliberately infected with Covid-19
5 Dunnes Stores set to enter grocery delivery market
6 Air travel never going ‘back to way it was’
7 Dublin and Cork airports look at setting up pre-flight Covid testing centres
8 State calls for applications to €500m disruptive technologies fund
9 Eir takes on extra staff as ComReg chases it on complaints
10 How to upgrade your home entertainment system for less
Real news has value SUBSCRIBE