Keynesian odd one out of Germany’s five ‘wise men’

One of the ‘wise men’ who advise Merkel, the economist is a prophet in the desert 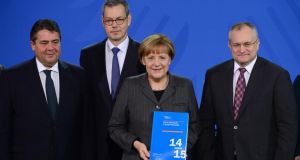 Life in Germany can be lonely if you’re Peter Bofinger. To paraphrase Little Britain, he’s the only Keynesian in the village.

The 50-year-old economist is one of the “five wise men” who advise the federal government on economic affairs.

But, since the outbreak of the euro crisis, he has become the most vocal opponent of Berlin’s rescue strategy.

The Merkel administration – and much of Germany’s economic, political and media establishment – view structural reform and budget cuts as preconditions to recovery. Prof Bofinger has argued for a demand-oriented response of anti-cyclical public investment and a more pragmatic approach to debt.

In most of Europe, that would place him at the heart of the economic and political mainstream. In Germany, it has made him a prophet in the desert.

“I don’t view it as lonely, my views give me a certain unique identifying factor,” said Prof Bofinger, who teaches at the University of Würzburg in Franken, northern Bavaria.

Postwar Germany’s prevailing political and economic ideology, the social market economy, foresees a very limited role for the state. It creates a framework in which markets can operate freely, intervening only when grave distortions occur.

This thinking, based on ordoliberal principles, is critical of Keynesian ideas and rejects its core idea: expansionary public sector investment in a downturn as crucial to fill the economic gap left by the retreating private sector. Germany’s mainstream thinks different: state economic intervention is only permissible after first pruning back the economy, to make taxpayer money go further.

Coupled with a stringent view of budget deficits, this is the logic that runs the German economy and which is visible on EU/IMF bailout programmes for Greece, Ireland and others.

Though considered common economic sense in Germany, it has been castigated as reckless austerity by neighbours. Peter Bofinger is one of the few prominent Germans who agree with Berlin’s critics.

He comes from a contrarian tradition: studying under Prof Wolfgang Stützel – a some-time proponent of deficit spending – who in turn had studied with Wilhelm Lautenbach, dubbed Germany’s “pre-Keynesian Keynes”.

But Keynesian theories are a minority pursuit in Germany, discarded by a mainstream that has framed the euro crisis as a debt crisis caused by profligate periphery countries requiring solidarity from EU core – with strict, ordoliberal conditions.

The resulting friction between Germany and its neighbours is as much cultural as economic. The word for debt in German – Schuld – is also the word for guilt, creating a strong cultural association between the two. Prof Bofinger sees in Berlin’s response to the crisis a “Schuldturm (debt tower) mentality” dating back to the Middle Ages.

Then, in a deterrent to others, debtors were locked in a tower until they paid their dues. Such towers still stand in some German cities, including in the Frankonian capital of Nürnberg, near Würzburg where Prof Bofinger teaches.

“This is precisely the politics that Germany is pursuing today, in particular with Greece,” said Prof Bofinger. “They wanted to punish Greece with extra-high interest rates and punish them so they don’t do this again.”

Characteristic of this approach, he says, is Berlin’s single-minded rigour in demanding that countries fulfil the terms of their EU/IMF “adjustment programmes” while simultaneously distancing themselves from the political consequences.

“People here don’t want to see that we had a role in bringing radical forces to power in Greece,” he said. “Rather than Berlin agreeing to give [ex-prime minister] Samaras a few billion to help fight youth unemployment last year they let him starve and are amazed that they get Tsipras and Varoufakis.”

As a well-placed observer, Prof Bofinger is concerned at a new nationalist streak he perceives in Germany’s EU debate, coupled with a blinkered logic in the new Alternative für Deutschland (AfD) party and across Germany’s mainstream media.

From the best-selling Bild tabloid to the business pages of the conservative Frankfurter Allgemeine, it is a narrative with regular flashes of encirclement angst: that Germany is surrounded by spend-thrift neighbours who want its money and, in their determination to get it, are reinterpreting euro-zone rules on the fly.

“It’s a very national-oriented and stupid way of thinking that says Germany’s economy is in better shape than for many a year, without asking where it comes from,” said Prof Bofinger. “Behind this debate is a lingering feeling here that we are the most virtuous, that we are harder working and saved more while others were lazy, lived beyond their means and thus their countries are dumps.”

“The debate here overlooks how we had extra-low wages for a decade to artificially boost our competitiveness and gave loans to [crisis] countries to buy our products – and that exports have taken off as a result.”

“People here don’t see how the euro was perfect for our export industry. Instead the discussion concentrates on the €60 or €80 billion Germany may lose in Greece – which would be manageable – without looking at the financial benefits we in Germany have from the euro.”

Being regularly outnumbered in public debates is often what makes Prof Bofinger such an interesting voice.

He ensures that the press conferences of the German Council of Economic Experts (Sachverständigenrat) are always good value. The events commence with a cool air of professorial civility but eventually descend into a shouting match, where Prof Bofinger happily contradicts his four colleagues on almost everything they say.

From euro bonds to an EU probe of Germany’s trade surplus, Prof Bofinger has been in favour while his colleagues thunderous in their condemnation.

Most recently, Prof Bofinger backed a statutory minimum wage of €8.50, describing it an overdue step to drive domestic demand and address concerns of Germany’s neighbours over its trade surplus. His “wise men” colleagues (including one woman) disagreed, dubbing the minimum wage a “social political experiment with uncertain outcome”.

Prof Bofinger rubbished such claims in their November 2014 report, saying that a minimum wage was standard practice across Europe and that the €8.50 rate put Germany firmly in the mid-range.

Two months into the new minimum-wage regime, the sky has yet to fall.

But employer groups and the business wing of the ruling Christian Democratic Union (CDU) are still on the war-path, attacking the minimum wage as overly bureaucratic for demanding, among other things, that employers document the hours their employees work.

Their concerns, reflected extensively in the media, are not shared by 86 per cent of Germans who consider the €8.50 pay floor a good idea, according to a survey conducted this week by the Infratest Dimap agency.

“I said the minimum wage would work, the others said it would cause 1 million extra jobless yet the minimum wage is here and the jobless rate is dropping,” said Prof Bofinger. “The majority were wrong and the minority opinion right but you can’t get that into the media here.”

Considering how often they disagree – the four “wise men” suggested last week, without him, that the euro zone might be stronger without Greece – it was striking when Prof Bofinger agreed with their criticism of ECB quantitative easing (QE).

The Würzburg professor says he has a lot of respect for the ECB crisis management to date and for president Mario Draghi. But flagging dates and quantities of bond purchases brought Draghi into a classic Zugzwang and forced him to move.

“If I were Draghi I would have made the announcement, then said it was on standby and ready to use but that the private sector had bought up enough so there was no need for a large-scale ECB intervention.

“Even the number – €1.1 trillion – makes no sense because it dates from a time in 2012 when the banks were completely insecure.”

The ECB decision has undermined further already dwindling confidence in the central bank and the euro among Germany’s middle classes, he warns.

“Because I hold the ECB in high esteem I don’t like to see how QE has spread dissatisfaction through the German middle classes.”

As a proponent of the more aggressive crisis approach adopted by the Federal Reserve and Bank of England, he says it is of little help that the ECB’s crisis strategy has been conservative by international standards. Ever the contrarian, the Würzburg economist suggests the time has come for the bank to surprise everyone and adopt a more bold strategy.

“We have a fundamental problem today with the philosophy that central banks have to be calculable, that markets have to understand them.

“Wrong: I think markets should be afraid of central banks and know little else about them and how they act apart, except that they have deep pockets and a long-term mission.”