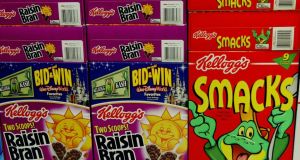 The breakfast cereal giant Kellogg’s, which routes a huge chunk of its global revenues through Ireland, has warned investors the international clampdown on corporate tax avoidance could have a “material impact” on its finances.

An Irish Times analysis of its accounts reveals the US giant, whose brands include Rice Krispies and Coco Pops, has directed more than €7.1 billion in sales from Europe, the Middle East and Africa through Dublin-registered Kellogg Europe Trading (KET) over the last five years .

In that time it has paid corporation tax in Ireland of only about €7 million, because KET is often loss-making due to large interest bills on loans it receives from a Luxembourg-registered cog of the Kellogg empire.

KET’s accounts for 2013 show the company has also accrued a deferred tax asset in Ireland of €29.5 million due to its losses, meaning it can effectively write this figure off against future Irish corporation tax bills.

In a statement yesterday, Kellogg’s said this referred to the OECD’s Base Erosion and Profit Shifting (Beps) project, which proposes to force multinationals to pay more corporation tax in countries where they generate most of their revenues.

“As [Beps] is ongoing, we don’t know what, if any, the potential impact of this will be on our business and so we have to flag it within our annual report as an uncertainty,” said Kellogg’s. “We are a responsible taxpayer and always work closely with the tax authorities, and within the tax laws, of the countries in which we make and sell our foods.”

The group’s sales of cornflakes and other popular brands in this country are routed through the Kellogg Company of Ireland. In 2013, this entity recorded sales of €63 million, generating a profit of €1.5 million.

KET’s accounts say it is involved in “the production and marketing of ready-to-eat cereals . . . in Europe, Africa and the Middle East”. Among its subsidiaries are the two main UK arms of Kellogg’s.

Ireland appears to be a vital part of Kellogg’s international financial structure.

Kellogg Europe Finance, another Dublin-registered entity, in 2013 paid a dividend of €40 million to a Luxembourg-based Kellogg company – the Duchy is also central to the group’s international tax planning.

Kellogg Europe Services, yet another Irish-registered part of the group, also recently received a cash injection from a Cyprus-registered entity, which was denominated in Russian roubles that were recorded as the equivalent of €16 million.

Kellogg is far from being alone in facing criticism for its international tax planning. Several multinationals, such as Apple, Google and Microsoft, have recently faced accusations they utilise Ireland, in conjunction with offshore tax havens, to reduce their corporate tax bills.