Europe gets some things right, such as its ruling on Apple’s taxes in Ireland, but the euro itself is broken and European politicians lack the will to fix it. It’s unlikely to end well, says the US Nobel economics laureate 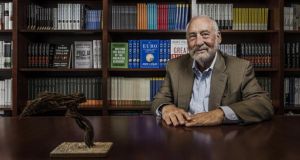 Joseph Stiglitz, a professor at Columbia University, argues that the single currency was a mistake in his new book, The Euro and Its Threat to the Future of Europe. Photograph: Sasha Maslov/New York Times

Joseph Stiglitz was supposed to be talking about his new book about the euro, which he believes is in danger of destroying the European project. But when we meet in London this week the European Commission has just issued its ruling ordering Apple to pay €13 billion in back taxes to the Republic of Ireland, a move the Nobel economics laureate applauds.

He believes, however, that the Apple decision is calamitous for Ireland’s reputation, which he says was already damaged this summer by the 26 per cent growth rate recorded for GDP in 2015. This reported growth is widely perceived as a distortion of Ireland’s economic performance, which has been more modest.

“You know that in the long experience of increases in productivity that [level of growth] is not likely, or possible. But there’s no limit on how much you can cheat. You can increase your cheating in one year by that much,” he says.

“That 26 per cent growth rate sent a strong message about the magnitude of the corruption going on. It’s tax corruption. People are not paying the taxes that they ought to be paying, and it’s robbing developing countries, it’s robbing the United States.”

Although the commission says that Apple’s tax deal with the Irish authorities broke EU state-aid rules, there is no suggestion that the company sought to unlawfully evade paying its fair share of tax.

“In this particular case it was legal. In some ways the fact that it was legal almost makes it worse, in the sense that it says that Apple has been able to buy governments. Not in brown paper envelopes but in job creation. ‘We’ll give you 300 jobs and you give us $1 billion.’ You think about the trade-off,” Stiglitz says.

He believes the commission was right to challenge the Apple deal, arguing that the company cannot claim that the money was really earned in Ireland but should not be subjected to the normal Irish tax rate.

“I think the reason Apple is such a good case is that it was the most successful company in the world and it’s paying the least taxes. So it’s a poster child. And they went too far. If they had gotten a 10 per cent tax rate maybe people might debate it. But people take an idea and push it to the extreme, and then people realise that was the logical conclusion. That makes them say, ‘Let’s stop it.’ ”

For Stiglitz the issue of corporate tax avoidance goes to the heart of what he sees as a corrupt system that promotes inequality and injustice and fuels political extremism.

Short, grey, bearded and rotund, he is 73 but seems younger, and his global round of lecturing, consulting and advising governments and politicians attests to his extraordinary energy.

A professor at Columbia University, in New York, Stiglitz has served as an economic adviser to Bill Clinton and as chief economist of the World Bank. More recently he has advised the Syriza government, in Greece, the Scottish government and Jeremy Corbyn, the British Labour Party leader.

In his new book, The Euro and Its Threat to the Future of Europe, Stiglitz argues that the single currency has achieved almost the opposite of what was intended. Instead of furthering political integration it has promoted disintegration, and instead of strengthening solidarity within the EU it has stretched it to breaking point.

He blames the decision to adopt a single currency without first providing the institutions that could make it work, and the ideological basis of the design of the European Central Bank. Unlike its US equivalent, the Federal Reserve, which must take unemployment and economic growth into account in setting interest rates, the ECB’s sole criterion is maintaining price stability.

Forced into the straitjacket of the single currency, with an interest rate that suited some parts of the continent better than it did others, the countries of the euro zone have seen inequality increase both between them and within them.

Germany is both the dominant player and, according to Stiglitz, the one with the most eccentric economic philosophy.

“Germany has a set of economic beliefs that is antithetical to that of anywhere else in the world. And yet it wins. So it puts the politicians in an impossible position. They’re told by their citizens they want growth, and the end of austerity, and they’re told by Germany, ‘You can’t have it.’ And they have to co-operate,” he says.

Stiglitz’s close observation of the actions in Greece of the troika of the EU, the ECB and the International Monetary Fund has made him highly critical of the measures imposed in response to the euro-zone debt crisis. Austerity is not only cruel, he argues, but also inefficient and self-defeating. He describes Ireland’s postausterity recovery as a “half-exception” that proves the rule.

“In some ways the Irish took their medicine better than anybody else. I was always amazed when friends in Ireland would say, ‘We got a 28 per cent wage cut,’ or something like that. That would be a revolution in most countries. And there was obviously a lot of suffering that went on.

“The fact that the UK, your neighbour, was doing a little better than the rest of Europe must have helped. The fact that you were a country that was more open to emigration also clearly helped the unemployment statistics. You’ve been through this before.”

Ideally, Stiglitz would like to see the euro survive, strengthened by major reforms that would involve a willingness to share risk and mutualise debt, but he admits that there is no political appetite for such a leap forward.

His second-best option is for a “flexible euro”, which would allow countries or groups of countries to adopt different versions of the currency in a flexible exchange-rate mechanism. If that is not acceptable, he thinks, the currency should be scrapped.

“I think the end of the euro would actually be good for Europe, in the sense that it has been a huge distraction and is leading to division, and there are other things on which Europe could focus that would lead to more integration. It’s hard to focus on these things when the economic project is a shambles,” he says.

The UK’s decision to leave the EU has shown that the process of political integration can be reversed, and Stiglitz believes that Brexit is potentially dangerous for the European project. He is confident, however, that the economic consequences for the UK will be manageable, particularly if the EU resists the temptation to be vindictive in negotiating the terms of the UK’s exit.

He sees the Brexit vote as part of a pattern throughout the developed world that sees citizens rejecting an economic and political system that has failed them.

“In the United States the bottom 90 per cent have been stagnating for a third of a century. It’s hard to sell capitalism like that. So it’s 90 per cent stagnation and an unfair lottery for the other 10 per cent. I think there’s a growing sense, at least in America, that the system is corrupt in a very profound way,” he says.

“I think it’s very clear the wheel is turning, but it’s not smooth. The World Bank for the last five years has been pushing industrial policies. The weight of the economics profession is now in support of industrial policies. Since attention began to be focused on inequality it made it very clear that our system was leaving a lot of people behind, and our politics have made it abundantly clear that trickle-down doesn’t work,” he says.

Stiglitz has been advising Hillary Clinton, the Democratic presidential candidate, and he is confident that she has taken on board the message from a primary season that saw Bernie Sanders’s left-wing insurgency and Donald Trump’s right-wing populism.

As for the euro, Stiglitz fears that it will continue to muddle through, with none of Europe’s politicians willing to make the changes necessary to make it a success, economically and politically.

“I think there’s a reasonable chance that it will not survive five years. I would hope they would make the reforms that I talk about, that they would make some of them. They will make them probably too slowly,” he says. “Greece’s GDP is lower than it was a year ago. The Greek crisis is not behind us. There’s a political stalemate in Spain. What I see is Europe lurching from crisis to crisis as long as they have this kind of tether around their neck which isn’t working.”