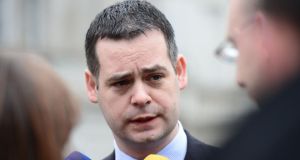 Sinn Féin’s Pearse Doherty: “We would be concerned about the growing spotlight on Ireland from our treaty partners in relation to our tax structures.”

The Revenue Commissioners has recovered €4.3 million in settlements from 19 Irish residents whose details were among 33 names passed along by French authorities investigating tax evasion.

Minister for Finance Michael Noonan has also said in a written reply to a parliamentary question that the US, Britain and Australia have advised the Revenue that they have obtained “a very significant amount of data” on complex offshore structures and that they intend to use this data to share information with other countries, including Ireland.

The investigation was likely to take some time, due to the complexity of the data, Mr Noonan added.

Sinn Féin finance spokesman Pearse Doherty, who asked the parliamentary question, said the statement of intent by the three countries on the sharing of tax information indicated that Ireland had kept “its head in the sand” around its corporation tax structures “for far too long”.

The jurisdictions cited by Mr Noonan were all ones that had previously “put Ireland on notice that they are looking at our tax structures”, Mr Doherty said. “We welcome the fact that the French have identified a number of tax evaders and that this has resulted in an extra €4.3 million for the exchequer. What we would be concerned about is the growing spotlight on Ireland from our treaty partners in relation to our tax structures.”

Mr Doherty asked the Minister if he or any of his predecessors had received from the French government, or any government, a list of suspected tax evaders and whether he would comment on the matter.

In his reply, the Minister said 33 names had been spontaneously given to the Revenue by the French ministry of finance. As well as the settlements from the 19 individuals – which followed investigations by the Revenue – there are ongoing inquiries in six other cases. Eight cases were closed as it was established there were no tax issues. A prosecution is before the courts in one case, and three other cases may lead to prosecution.

The Revenue regularly receives information from French authorities under the terms of Ireland’s double taxation treaty with France and an EU directive on co-operation between member states on tax matters, Mr Noonan noted.

Details of suspected cases of tax evasion may be shared between tax authorities at the request of the country that believes it is due a liability.

However, information can also be given spontaneously where tax officials in one country become aware of information – for example during an audit – that could relate to the loss of tax in the other country.

In 2010, French authorities gave Greece a list of more than 2,000 names of Greek individuals who had placed money in Swiss bank accounts.