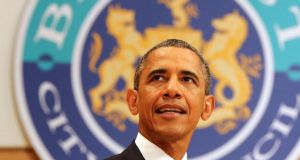 “Jobs and opportunity are essential to peace.” That is what Northern Ireland wants to tell the world this week.

And who better to get the message out there than the president of the United States.

There will be many notable soundbites from Barack Obama’s first official visit to the North and during the G8 summit in Fermanagh.

But his assertion about how important “jobs and opportunity” are to Northern Ireland during his keynote address at the Waterfront Hall in Belfast yesterday is one of the most crucial for the North.

Thousands of people are employed by American-owned companies in Northern Ireland.

American inward investors contribute millions of pounds to the North’s economy each year not only just in terms of salaries but also with regard to the additional jobs they support in their respective communities.

According to Invest NI, the regional business development agency, there are currently around 165 American-owned companies operating in Northern Ireland.

Since 2008 these companies, backed by Invest NI, have invested or have made commitment investments totalling £447 million in the North.

Vital role
Companies such as Allstate Northern Ireland, which provides a one-stop shop of IT services for their American parent, play a vital role in the North’s economy.

Allstate Corporation was one of the first major US investors to locate in Northern Ireland after the Belfast Agreement was signed.

Today it employs nearly 2,000 people across three sites in Belfast, Derry and Strabane.

Last month it unveiled plans to create a further 650 jobs in the North, which should translate into a £20 million annual boost in additional salaries.

Almost 200 of these jobs, which range from software development to software testing, infrastructure services and analytics posts, have already been filled. The company expects to recruit another 450 people by 2016.

Yesterday it was business as usual at Allstate Northern Ireland’s main office in Belfast at Lanyon Place, despite the fact the US president was next door at the Waterfront Hall.

But the significance of seeing Obama in the flesh in Belfast was not lost on two senior American executives from Allstate Corporation who just happened to be in Belfast on their latest company visit.

He says Obama’s visit also gives Northern Ireland an important opportunity to highlight the cultural similarities between the North and the US and why it is a good place to do business.

“We are cultural cousins, we don’t do things differently in fact. It is seamless for American investors and don’t forget there are also a lot of historical links between Northern Ireland the US which the president highlighted in his address at the Waterfront Hall,” Ferran added.

He believes the success that Allstate has enjoyed as a result of its investment in Northern Ireland makes it “a lot easier for other investors to follow in our footsteps”.

It is a sentiment echoed by New York-headquartered Citi, which was the first investment bank to locate in Northern Ireland, in 2004. The group, which is actively recruiting in the North, is based in the Titanic Quarter in east Belfast.

John Healy, director of Citi Service Centre in Belfast, said: “Citi has had tremendous success in Belfast. The continued focus and support that President Obama reiterated in his speech in Belfast will undoubtedly underpin future growth here, not just for Citi but for other US investors too who will come and see all that Northern Ireland has to offer.”

Potential investors
Any investment the North gets is hard won, but it is a much different sell to potential American investors in 2013 than it was when Allstate first came in 1998.

Obama highlighted this himself yesterday.

“Belfast is a different city. Once-abandoned factories are rebuilt. Former industrial sites are reborn. Visitors come from all over to see an exhibit at the MAC, a play at the Lyric, or a concert here at Waterfront Hall,” he said.

A simple walk around Belfast will confirm what he says is true and also reinforce just how welcoming the city is to American investors.