Ireland only EU economy to grow in 2020 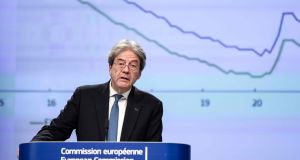 Paolo Gentiloni, the EU’s economics commissioner. “As increasing numbers are vaccinated over the coming months, an easing of containment measures should allow for a strengthening rebound over the spring and summer.” Photograph: AFP

Ireland’s economy was the only one to grow in the EU last year, economic figures show, boosted by medical and pharmaceutical exports.

The figures, released in the European Commission’s Winter 2021 Economic Forecast, show that it expects Irish GDP to grow by 3.4 per cent in 2021 and marginally faster in 2022 at 3.5 per cent.

The euro zone economy as a whole will grow 3.8 per cent this year, and at the same pace next year, Brussels said.

While the forecast for this year is lower than the commission’s previous projection, published late last year, its 2022 prediction is stronger. That reflects the impact of widening vaccination coverage and easing lockdowns, it said.

Ireland’s economy grew by 3 per cent last year despite the impact of the Covid-19 pandemic and related shutdowns. That is in sharp contrast to average contraction across the EU of a -6.8 per cent slump and stark drops of -11 per cent in Spain and -10 per cent in Greece.

All EU member states are forecast to return to economic growth this year, particularly in the second half of 2021, but there are strong risks and uncertainties depending on the success of vaccination campaigns and whether resistant strains of Covid-19 emerge.

“We remain in the painful grip of the pandemic, its social and economic consequences all too evident,” said economy commissioner Paolo Gentiloni.

“Yet there is, at last, light at the end of the tunnel. As increasing numbers are vaccinated over the coming months, an easing of containment measures should allow for a strengthening rebound over the spring and summer.

“This forecast is subject to multiple risks related, for instance, to new variants of Covid-19 and to the global epidemiological situation.”

Ireland’s economy was particularly supported by “exports from multinational companies specialising in medical equipment, pharmaceuticals and computer services”, according to the European Commission.

Nevertheless, the State did see one of the sharpest declines in nights spent in tourist accommodation, with a fall of 70 per cent compared to the previous year. Only Malta and Greece saw sharper drops.

Tough restrictions to bring down the Christmas spike in Covid-19 infections are depressing growth at the start of the year, along with new trade frictions with Britain. However, the latter is not having as bad an effect as previous forecasts indicated because they were based on the assumption that there would be no deal and that tariffs would apply on trade.

Along with the uncertainties of the pandemic, there are also specific risks to Ireland’s economic outlook, particularly “changes in the international taxation environment and the activities of multinationals registered in Ireland, which could shift GDP growth in either direction”, the forecast said. – Additional reporting, The Financial Times Limited 2021

10 Irish whiskey sales near milestone of 12m cases a year