Greek referendum: ‘Yes’ side has four-point lead in latest poll

Imposition of capital controls and bank closures will be key factors, analysts say 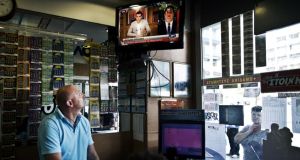 The owner of a lottery and sports betting shop watches the Alexis Tsipras press conference in Athens on Wednesday. Greece was being “blackmailed” and a No vote would be a “decisive step to a better agreement” with the country’s lenders, said Mr Tsipras. Photograph: Angelos Tzortzinis/AFP/Getty Images

A slim majority of Greeks are set to vote against their government in Sunday’s referendum, according to the latest opinion poll that gave the Yes camp a four-point lead over the No side.

The survey, conducted by GPO for BNP Paribas bank, put the Yes vote on 47.1 per cent and the No side on 43.2 per cent. It also found that 60 per cent of those asked believed Greece should remain part of the euro zone, not matter what the cost.

In contrast, an earlier poll, conducted for the Efimerida ton Syntakton daily, put the No camp ahead on 46 per cent, with the Yes side trailing by nine points. However, the same survey also found that support for a No vote had slipped from 57 per cent after the imposition of the capital controls and the closing of banks, which political analysts believe will be one of the key factors in determining the outcome of the plebiscite.

The polls were published on the same day as the prime minister, Alexis Tsipras, used a televised address to dispel rumours that the ballot might be cancelled or that he would switch to campaigning for Yes in order to secure a deal with the country’s lenders.

Greece was being “blackmailed” and a No vote would be a “decisive step to a better agreement” with the country’s lenders, he said.

Opposition leaders in Greece accused Mr Tsipras of engaging in public relations gimmicks and of putting Greece in its worst position in decades.

Calling for a Yes vote in the referendum, former conservative prime minister Antonis Samaras said Mr Tsipras in his speech “wasn’t brave enough to admit that he was the one who authorised the closure of the banks and didn’t dare admit that he submitted austerity proposals similar to those of Greece’s creditors”.

“Having led the country to the brink of dissolution, deprived the country of the . . . support of the ECB, and issued a decree shutting banks and imposing capital controls that has left Greeks queuing at ATMs, Mr Tsipras is continuing with his cunning communicative games,” former finance minister and socialist Pasok MP Evangelos Venizelos said.

But in backing his prime minister’s stance, finance minister Yanis Varoufakis used his blog to list six reasons why Greeks needed to vote No on Sunday.

Blaming the breakdown in the negotiations on the lenders’ refusal to “reduce our unpayable public debt” and that it should be paid by the “weakest members of our society”, Mr Varoufakis said that Greek bank deposits were safe despite the country’s creditors having “chosen the strategy of blackmail based on bank closures”.

“The future demands a proud Greece within the euro zone and at the heart of Europe. This future demands that Greeks say a big No on Sunday, that we stay in the euro area, and that, with the power vested upon us by that No, we renegotiate Greece’s public debt as well as the distribution of burdens between the haves and the have nots,” he added.

In her characteristically strong terms, his party colleague, parliamentary speaker Zoi Konstantopoulou, used a televised address to claim that “yesterday’s people, those responsible for the destruction of the country and people, did everything, along with their domestic and foreign partners, to stop the expression of the popular will by preventing or frustrating this referendum.”

Other Syriza MPs urged the government to continue negotiating. “At this late stage, I call on the government to accept the need to pursue negotiations, even if the European Union is not the one we had hoped for and looked forward to,” said Constantinos Tsoukalas, a retired sociology professor elected with the party in January.