Thousands back government in Athens march 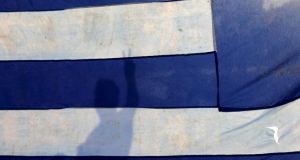 A protester flashes a victory sign behind a Greek flag in front of the parliament building, during an anti-austerity rally in Athens, Greece. Photograph: Yannis Behrakis/Reuters

Prime Minister Alexis Tsipras has urged Greeks to reject the terms of an international aid deal in a July 5th referendum, dismissing warnings that a ‘No’ vote would drive Athens out of Europe’s currency union.

“I don’t think that their plan is to push Greece out of the euro but to end hopes that there can be different policies in Europe, ” Mr Tsipras told Greek state television.

Thousands of people flocked to Syntagma square below the Greek parliament building tonight to demonstrate their support for the government, which has ordered banks to shut until next week after ATMs ran dry.

Earlier, the Greek government published the text of the question it plans to put to citizens in a referendum on Sunday, asking them to decide whether or not to accept the demands made by international lenders in return for fresh cash to keep Greece from defaulting on its debts.

The referendum poses a simple question: “Should the proposal that was submitted by the European Commission, the European Central Bank and the International Monetary Fund at the Eurogroup of June 25th, 2015, which consists of two parts that together constitute their comprehensive proposal, be accepted?”

The “No” box appears as the first option, above the “Yes” box.

The Syriza-led government, which rejected the proposal in negotiations as contrary to its electoral pledges, has urged Greeks to vote “No”.

It says this will strengthen its hand in talks with the lenders, but euro zone leaders including European Commission chief Jean-Claude Juncker, Eurogroup chairman Jeroen Dijsselbloem and Italian prime minister Matteo Renzi made clear on Monday they would see a ‘No’ vote as a rejection of euro membership.

Greece has said it will not pay a €1.6 billon loan installment due to the International Monetary Fund on Tuesday, highlighting the depth of the financial crisis facing the country.

Ministers have said repeatedly that Greece would not have the funds to pay the IMF unless it reached a deal with creditors to unlock €7.2 billion in bailout funds frozen while the two sides wrestled over the conditions demanded of Athens. After talks broke down it became a virtual formality that the IMF’s June 30th deadline would not be met. IMF managing director Christine Lagarde earlier this month said Greece would be in default as of July 1st if it failed to the pay the money, though an IMF spokesman last week said a missed payment would classify Greece as “in arrears”.

The missed payment would bring Greece closer to an exit from the euro zone currency if it prompted the European Central Bank to cut off emergency funding that Greek banks rely on. But the ECB is expected to maintain that lifeline at least for this week and analysts say Greece could default and remain in the euro.

Elsewhere it has been reported that the European Central Bank rejected Greece’s request for €6 billion of additional emergency funding on Sunday but is expected to keep the funding line used by Greek banks open until the July 5th referendum, according to sources.

“The request by the Bank of Greece was for €6 billion of ELA (Emergency Liquidity Assistance),” said a source. “The recommendation submitted to the ECB was signed by the governor of the Bank of Greece,” the source said. “After the call for a referendum and the breakdown of talks, one could not do anything different than what did happen.”

The ECB, which has been increasing the amount of funding available to the banks, froze the funding line on Sunday, meaning the banks were unable to open on Monday given the deposit withdrawals and prompting

German chancellor Angela Merkel has warned Athens that Europe will not sacrifice its long-term political and fiscal principles in the short-term interest of keeping Greece in the euro.

In a closely-watched speech, the German leader said the euro was more than a common currency, but an expression of European integration “based on common trust and common principles”.

“What’s existential is the common understanding that European solidarity, on the one hand, is accompanied on the other hand by ... everyone making their own contribution to solving their problems,” she said. “Can we file away our principles just this once? No we cannot.”

Filing away this principle, she warned, would undermine the single currency and the EU’s credibility in the long-term.

Speaking in Brussels, Mr Juncker said that, regardless of the final question, a No vote in Greece’s referendum next Sunday “would mean that Greece is saying no to Europe.”

That put him at odds with Mr Tsipras, who insisted in a letter this morning to EU leaders that the July 5th vote was not about Greece’s euro membership - “to which the Greek government is fully committed” - but about gauging popular support for a loans-for-reforms agreement to unlock badly-needed funds from its second EU-IMF rescue programme.

Europe suffered a major blow and good will was thrown to the wind as egotism and tactical populist games took precedence,” he said.

“It is not a game of bluff, there are no winners or losers, either we are all winners or all losers.”

In a dramatic, direct appeal, he asked the Greek people to vote yes in the referendum, regardless of the question on the ballot paper, saying the “door is still open” to talks but that time was “in the last minutes”.

He also said “ we mustn’t commit suicide out of fear of death”.

With scepticism in Brussels and Berlin, French president Francois Hollande appeared more amenable after a crisis meeting in Paris, saying: “I would like talks between Greece and its creditors to resume.”

Ahead of Tuesday’s deadline to repay €1.6 billion to the IMF, with capital controls limiting Greek cash withdrawals to €60 daily, Mr Tsipras appealed to his EU colleagues to “re-examine” their position on Greece. The limit does not apply to people using foreign cards.

As Greek banks remained closed today, and many of their ATMs empty, stocks dropped around the world as the risk increased that Greece would leave the euro region.

Taoiseach Enda Kenny has claimed Ireland was very close to a Greek-style situation of capital controls and queues at ATM machines, as he asked the Syriza led government to “come back to the table”.

Speaking in Athlone, Mr Kenny said he hopes “common sense can prevail” and said resumed negotiations could allow for measures to increase growth, infrastructure and investment in Greece.

European bank shares fell sharply on Monday. Top banks in Spain, France and Germany were down more than 6 per cent as the risk of a spillover to banks in other peripheral euro zone countries spooked investors.

The Greek government will keep banks shut at least until after July 5th, the date of the referendum, and withdrawals from automated teller machines were limited to €60 a day when they reopened at midday. The stock exchange will also stay shut.

As Mr Tsipras announced the emergency measures late on Sunday, there were long queues outside ATMs and petrol stations as people raced to take out cash before it was too late.

“I’ve got five euros in my pocket, I thought I would try my luck here for some money. The queues in my neighbourhood were too long yesterday,” said plumber Yannis Kalaizakis (58) outside an empty cash machine in central Athens on Monday. “I don’t know what else to say. It’s a mess.”

Despite the financial shock, parts of daily life went on as normal, with shops, pharmacies and supermarkets in the city opening and Greeks meeting to discuss their country’s fate at cafes and restaurants. Tourists gathered as usual to watch the changing of the presidential guard outside parliament.