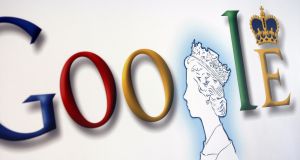 The agreement for Google to pay back-taxes to London comes as the internet search engine faces a demand for up to €1 billion from the French tax authorities. The Italian tax authorities are also reported to have also challenged the company. File photograph: Adrian Dennis/AFP/Getty Images

Google will pay less tax in Ireland on the profits from its lucrative British business after the company settled a UK tax audit for £130 million (€171.8 million) and agreed to pay higher tax in future to the London authorities.

The internet search engine and advertising giant, long criticised for aggressive tax strategies at its Irish unit, had been under investigation by Britain’s revenue service since 2009.

The agreement to pay back-taxes to London comes as Google faces a demand for up to €1 billion from the French tax authorities. The Italian tax authorities are also reported to have also challenged the company.

The bulk of the tax liability on Google’s profits arising from sales in the British market has traditionally been borne by the Irish operation, the company’s headquarters for Europe, the Middle East and Africa.

However, the extent to which to the British deal will reduce the amount of tax paid in Ireland remains unclear.

The British market is Google’s second-largest outside the US, with revenues of $6.5 billion in 2014. The UK settlement includes a £46.2 million tax payment in respect of £106.5 million in British profits in the 18 months to June 2015.

HM Revenue & Customs had questioned the allocation of Google’s profits in Britain to the unit in Ireland, which makes use of the “double Irish” tax mechanism to pay a very low rate of tax.

The mechanism plays on the difference between Irish law and that in offshore jurisdictions such as the Bahamas.

In late 2014 the Government moved in the face of international pressure to phase out the “double Irish”, but it remains in place for companies already using it until the end of 2020.

Google’s corporate vehicles in Ireland include Google Ireland Holdings, an unlimited company for which financial information is not publicly available.

These figures reflect Google operations in numerous markets, Britain among them, but they do not provide a country-by-country breakdown.

A note in the 2014 accounts said Google Ireland Ltd had received official notifications of reassessment from “foreign” tax authorities in respect of taxation payments between 2004 and 2012.

Google has paid only minimal corporate taxes in Britain as it had no “permanent establishment” there for tax purposes.

Although there is no change to this corporate structure arising from the British settlement, it is understood the agreement to pay more tax in Britain involves a substantial change to the methodology deployed to calculate how much it pays there.

Future Irish taxes will reduce as a result, but it is understood the settlement has no impact on taxes paid in the past in respect of profits in Britain.

“We have agreed with the UK tax authority a new approach for our UK taxes and will pay £130 million covering taxes since 2005,” said a Google spokeswoman.

“We will now pay tax on revenue from UK-based advertisers which reflects the size and scope of our UK business.

“The way multinational companies are taxed has been debated for many years and the international tax system is changing as a result. This settlement reflects that shift and is in line with recent OECD guidance.”

10 Eirgrid proposals to include €2bn power line around Irish coast