Germany and France in austerity vs stimulus stand-off

In Germany, talk of European austerity’s demise has been greatly exaggerated 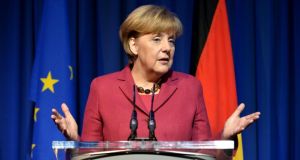 Angela Merkel: facing a bleak autumn thanks to Ukraine uncertainty and Russian sanctions

German television viewers were treated to an unlikely spectacle this week: a chancellor who lands in bed with a French president. TV movie the State Affair was escapism of the highest order and prompted snorts of derision from Germans as deep divisions open up on either side of the Rhine.

French Socialist leaders see Europe’s growing economic chill as proof of the fallacy of austerity – and an opportunity to bury, or at least prune back, the Berlin-lead reform agenda.

Germany refuses to blink, meanwhile, insisting that recovery in France and Italy depends on leaders implementing, rather than announcing, far-reaching economic reforms.

The French-led camp were as heartened as the German camp was frustrated by ECB president Mario Draghi’s apparent call in the US for EU leaders to boost growth by emphasising fiscal stimulus over austerity.

According to Der Spiegel magazine, when Angela Merkel called Draghi last week for an explanation of his remarks in Jackson Hole, the ECB president said reports were overblown and failed to mention his call for continued structural reform and debt reduction.

So who has the upper hand in Europe’s high-stakes austerity-stimulus stand-off?

Austerity zeal would dump the French left “on the scrapheap of history”, he told Die Zeit weekly, and drive voters into the arms of the far-right Front National and Marine Le Pen.

“If the French don’t find a way back to growth, they will break European treaties at the ballot box, a catastrophe for Europe,” said Mr Montebourg. “I would like to warn our German friends to recognise the risk they are taking.”

Merkel’s officials are unimpressed, saying austerity cannot be the source of France’s problems considering the Hollande administration has yet to try it.

Berlin officials are tireless in producing economic charts they say backs their strategy of pruning budgets and reducing debt.

Europe’s least attractive economic profiles – low growth and competitiveness, high jobless rates and deficit – are France and Italy, they say, who bridle against austerity while calling loudest for economic stimulus. Countries such as Ireland and Greece, who have swallowed the bitter pill of austerity, Berlin believes, are beginning to see the light.

Frustration with France can’t mask serious worries in Germany about its oldest European partner. But Berlin is unsure how to give Paris a hand without the French trying to take the whole the arm.

Concessions to France would probably trigger a backlash from the Bild tabloid, which has already dubbed France – Frankreich in German – “Krankreich” or sick kingdom, and boost Germany’s new eurosceptics, the Alternative für Deutschland.

Smaller EU countries are likely to protest at concessions to France, reviving their complaints that some euro zone countries are more equal than others.

The key question for Berlin is whether it would back wriggle room for France and Italy in EU fiscal rules as part of a larger economic rescue ring for the continent.

After disappointing second quarter data in Germany, showing a 0.2 per cent contraction, a bleak autumn is looming here thanks to Ukraine uncertainty, Russian sanctions and the myriad of Middle East crises.

Order books are emptying as nervous German and international customers postpone investment. But the sense of urgency in Berlin over Europe’s economic prospects differs along party lines.

Christian Democratic Union (CDU) finance minister Wolfgang Schäuble’s priority is to deliver a balanced budget next year for the first time in half a century. But he knows his Social Democrat (SPD) predecessor Peer Steinbrück was close to the same goal when the financial crisis struck.

Over at the SPD-controlled economics ministry, meanwhile, officials have devised a 10-point emergency plan, including tax concessions and other stimulus measures to boost investment in German companies.

Economics minister Sigmar Gabriel, the SPD leader, is sympathetic to the plight of his socialist colleagues in France. But, given the bad-tempered and impatient attitude towards France in the German media, it is far from certain he would back a Europe-wide stimulus programme and risk a blow-out with Merkel.

In Germany, for now at least, rumours of European austerity’s demise have been greatly exaggerated.