Generation debt: how young adults carry legacy of the crash

Central Bank research adds to picture of a generation under strain 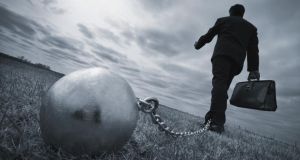 A Central Bank study says mortgage indebtedness proves to be a “particularly heavy burden” for the younger age cohort.

New Central Bank research points to the concentration of personal indebtedness among younger Irish adults. Taken alongside previous studies which found that people under the age of 45 bore a disproportionate burden in the crash, the latest findings add to the picture of a generation under strain.

The Central Bank study, published with its quarterly economic forecast, tackles “the financial position of Irish households” from the perspective of income, assets and debts.

Although researchers Martina Lawless, Reamonn Lydon and Tara McIndoe Calder note that more than half of all households hold some form of debt, they say mortgage indebtedness proves to be a “particularly heavy burden” for the younger age cohort. This is precisely the same cohort which is faced with high childcare costs, relentless seepage from spending power, high emigration when work cannot be found and – in many cases – the prospect of lower retirement income than people already in retirement.

This is an important point, for variable rate customers help to compensate banks for the costs they incur on trackers and for their abundant arrears. It is not too great a leap to extrapolate that the major burden here falls on younger mortgage borrowers.

After all, the weight of mortgage debt is at its heaviest when borrowers are younger. It is only as borrowers age that repayments build and the principal debt reduces.

On this point, the Central Bank research is clear: “Sixty per cent of households whose reference person is in the youngest age bracket (between 18 and 34) have some outstanding debt, with this most likely to be unsecured debt.

“Households in the next two age categories (35-44 and 45-54) are the most likely to be indebted, with three-quarters having some type of debt and over half having outstanding mortgages associated with their household main residence.

“As the household ages, debt participation rates fall considerably, particularly for household main residence mortgage debt (owed by 5.3 per cent of those aged 65-74).”

But there is more in play here than the “lifecycle” effect. “The higher outstanding mortgage amounts in the younger age groups partly reflect the shorter amount of time they have been repaying loans but also captures a cohort effect of households that bought property at a time of particularly high prices.”

Is is also the case that buyers of ever more expensive second-hand homes in the boom times paid hefty stamp duty, often sourced from debt drawn down separately from the core mortgage. All of that served to intensify the debt burden – and magnify the crash that followed. Large numbers of younger borrowers became trapped in the cul-de-sac of negative equity or, worse still, the accumulation of ever-growing arrears after the loss of a job.

All of this serves a salutary reminder of previous findings by the Economic & Social Research Institute, which concluded that mortgage arrears are most common in households with a head between 25 and 44 years of age. The same research by Petra Gerlach-Kristen found that negative equity was “most common for households in the under 30 bracket, followed by those aged between 30 and 39”.

With recovery under way and the general election on the horizon, the question arises as to whether any such concerns penetrate the political and policy debate in the months to come.

While it is a given that the “grey vote” in Ireland constitutes a powerful political bloc, a very large cohort of younger people labours under serious constraint in the post-crash world.