Faith and begorrah: Ireland makes its case to New Yorkers 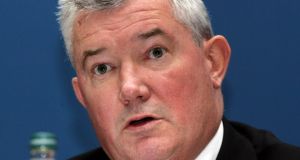 Speaking of US-Irish relations, the denizens of New York were treated, if that’s the word, to a celebration of our State’s economic exploits last week.

September 11th is, of course, a day of infamy in New York for obvious, tragic reasons. On that day this month, when the city’s financial folk are probably more likely to read the New York Times than any other, there was an eight-page, paid-for pullout on Ireland featuring several blue-bloods (or green-bloods?) of Irish economic and public life.

“Ireland: Turning a huge corner,” blazed the headline on the main piece, illustrated with a snap of a bemused-looking Bar- ack Obama with a grinning Enda Kenny, shamrock-in-pocket.

Next up was Charlie Flanagan, the Minister for Foreign Affairs, pictured for all the world like he was sitting behind the desk in the Oval Office.

Government Ministers dominated the next few pages, until Bank of Ireland chief executive Richie Boucher stares back from page four, with one eyebrow raised like a corporate Carlo Ancelotti.

John Cronin of law firm McCann Fitzgerald and Brian O’Gorman of its rival, Arthur Cox, feature next. Where would we be without our legal eagles, eh?