Troika seals accord on Greece ahead of euro zone meeting

Implementation of policy linked to bailout ‘behind in some areas’, lenders say 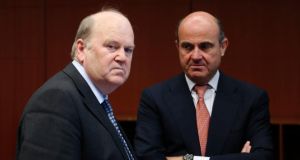 Greece lumbered toward its next aid payout, possibly broken up into smaller installments and tied to additional economic reforms by prime minister Antonis Samaras’s government.

Greece’s troika of creditors sealed a staff-level accord on new economic and deficit-reduction steps, leaving open when as much as €8.1 billion will be released. Euro-area finance ministers will decide on a portion of that payout when they convene this afternoon in Brussels.

“This morning we reached an agreement within the troika,” Dutch finance minister Jeroen Dijsselbloem said as he arrived for the talks. “We are going to judge their progress. Based on that we may decide on a next tranche” that may be divided into installments if that’s “necessary” and “helpful,” he said.

European governments led by Germany are continuing to keep Greece on life support, unwilling to let it go bankrupt and exit the euro while doling out aid in the smallest possible doses to avoid upsetting their own taxpayers.

Political tumult in Portugal, among the five euro countries tapping emergency aid, raised the pressure on creditors to keep Greece’s program on track. Germany, the biggest creditor, is seeking to avoid a flareup in the crisis as chancellor Angela Merkel campaigns for re-election in September.

“While important progress continues to be made, policy implementation is behind in some areas,” the troika, comprising the European Commission, International Monetary Fund and European Central Bank, said in a statement today.

Interviewed yesterday while Greece and the creditors were still in talks, European Union economic and monetary affairs commissioner Olli Rehn said there are “reasonable chances” of an agreement on the next disbursement.

“That really depends on Greece and whether it is able to ensure that all the milestones will be met,” Mr Rehn said in Aix-en-Provence, France.

Creditors’ assessment of whether Greece was entitled to the next tranche in €240 billion euros of loans was jolted last month by a government upheaval in Athens, in which Mr Samaras lost one of his two coalition partners in protest of his sudden closure of the ERT state broadcaster.

Mr Samaras handed more prominent ministries to the socialist Pasok party, his New Democracy party’s historic rival, in the ensuing reshuffle. The shrunken coalition has 155 of the 300 seats in parliament, with Pasok’s 28 lawmakers holding the key to legislation.

The latest setback came last month, when no bids came in for the national gas company Depa SA. “The long-term problem is that the fiscal plan for Greece is entirely implausible,” said Fredrik Erixon, head of the European Centre for International Political Economy in Brussels. “There’s a charade going on between the troika and the Greek government and there will be further bumps in the road regarding future bailout payments.”

“If we get proof that Greece is living up to everything, then Greece will get its money,” Luxembourg finance minister Luc Frieden told reporters as he arrived at the meeting in Brussels this afternoon.

In Athens, thousands of Greek municipal workers and state school teachers took to the streets to protest against the public sector layoffs that the government has promised in exchange for the funds.