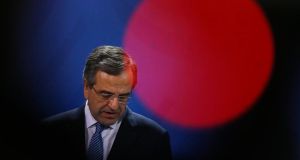 Greek prime minister Antonis Samaras has insisted there is no “hole” in Greece’s EU-IMF programme and, after a six-year recession, insisted he could see light at the end of the reform tunnel.

Speculation has grown about the future of the Greek programme amid reports of a funding gap and faltering progress of the latest visit by troika inspectors.

“There is no need for new money or a new memorandum, we want to keep with this programme and its targets,” said Mr Samaras at a press conference in Berlin yesterday. “We are within our goals, even a little ahead . . . we are meeting our [obligations] and think others should do the same.”

Alongside him, German chancellor Angela Merkel noted that Greece had made “impressive . . . considerable progress” in recent months with reforms that “go deeper and further” than in the past. It was worthwhile “not always assuming the worst” of Greece, she said, “but assuming some good, too”.

“But I think it’s very important . . . that the promises Greece made are implemented and that, on this basis, the next tranche can be paid out,” she said.

Her optimism contrasted with the views of euro group chief Jeroen Dijsselbloem. “Many euro zone finance ministers are starting to lose patience,” Mr Dijsselbloem told Ta Nea daily. “Greece still has plenty of work to do.”

On Thursday, troika officials confirmed that questions remained over Greek progress with reforms and that on-again, off-again talks would resume early next month. At stake is a reported 2014 fiscal gap of as much as €2.9 billion which, if confirmed, could force further cutbacks on Greeks.

Budget surplus
Mr Samaras dismissed Mr Dijsselbloem’s concerns, pointing out that Athens was on its way to posting a primary budget surplus – taking in more money than it spends, excluding interest payments.

Official confirmation of the surplus next April, he said, would see the “possibility [of debt relief] become a reality”.

The Greek leader conceded there was further work to be done but he refused to consider the possibility of further austerity measures.

“There will be no further wage or pension cuts,” he said.

Meanwhile, European Central Bank president Mario Draghi called for the early introduction of “bail-in” rules to force creditor involvement in the cost of future bank rescues and wind-ups. Such rules would only reassure investors, Mr Draghi said, if there was a clear commitment to provide a public backstop for winding up European banks.

Berlin insists that public funding can only come via the ESM bailout fund, and after all other sources of funding have been exhausted.

“It would be difficult to make such a pecking order credible without a public backstop for the single resolution fund for exceptional cases where its resources are exhausted,” said Mr Draghi. “Otherwise, investors may suspect that governments would at some point be forced to step in again.”

Mr Draghi insisted such a public backstop could be clawed back from a levy of banks to ensure it would be fiscally neutral for the taxpayer.