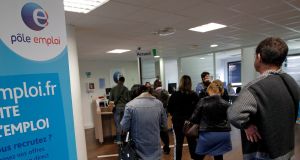 The euro-area jobless rate rose to a record level in February, adding to signs that the currency bloc's recession extended into the first quarter.

Unemployment in the 17-nation euro area was 12 per cent in February and the January figure was revised up to the same level from 11.9 percent estimated earlier, the European Union's statistics office in Luxembourg said today.

That is the highest since the data series started in 1995.

The euro-zone economy has contracted for five straight quarters and that trend is forecast to continue in the first three months of this year.

The European Central Bank, which holds a rate-setting meeting this week, forecasts the economy will shrink 0.5 per cent in 2013. The ECB has held its key rate at 0.75 per cent since July.

"The upside for domestic demand in the euro zone is likely to remain constrained for some time to come by tighter fiscal policy in many countries, still-tight credit conditions, high and rising unemployment, and limited consumer purchasing power," said Howard Archer, economist at IHS Global Insight in London.

"This is particularly true of the southern periphery euro-zone countries, and we expect extended contraction in both Italy and Spain to weigh down appreciably on overall euro-zone GDP in 2013.”

Today's report shows that 19.1 million people were unemployed in the euro area in February, up 33,000 from the previous month.

The European Commission predicts unemployment rates of 12.2 per cent this year and 12.1 per cent in 2014.

ECB president Mario Draghi said on March 7th that "it is of particular importance at this juncture to address the current high long-term and youth unemployment."

Businesses ranging from banks to carmakers and airlines are trying to cut costs by shedding jobs.

Spain's CaixaBank last week reached an accord with its unions to cut 2,600 jobs. Danone, the owner of Evian bottled-water and Activia yogurt, plans to shed 900 jobs in Europe as demand weakens.

1 How I managed to cut my mobile phone bill by at least a half
2 Son putting elderly dad under pressure to sign over land
3 Fiona Reddan: Who’s afraid of Revolut? Not AIB and BOI it seems
4 Lahinch Golf Club runs out of its own cash after €3m Covid-19 hit
5 State may face €1 billion in compensation in Covid-19 case, Press Up group claims
6 Is Coveney the right man to lead Greencore out of the Covid-19 crisis?
7 iPhone 12 Pro Max review: A must-have if you like big phones
8 Ryanair warns of further cuts, Stripe to raise more funds, and AI for cows’ faces
9 UK executives rush to sell shares over capital gains tax fears
10 Workers have little idea of the cost of retirement income
Real news has value SUBSCRIBE