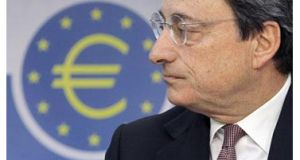 Mr Draghi said the body would continue to discuss with Irish authorities "what may be achievable" with respect to the promissory note on the Irish Bank Resolution Corporation (IBRC), the former Anglo Irish Bank.

He was responding to a letter on January 7th from Fianna Fail spokesman on finance Michael McGrath in which he urged some progress on a deal.

Painting a lugubrious picture of the state of the country following efforts to reduce spending and the wider impact of the latest budget on the public, Mr McGrath said: "I detect a growing sense that this resilience [to cuts] is waning."

"There is a widespread view that, while Irish people have done all that is asked of them to bring about economic recovery, this is not being reciprocated by action from our European partners to underpin what has been achieved to date."

Mr McGrath in particular cited a lack of progress to the commitment given by EU heads of state last year "to break the vicious circle between banks and the sovereign [debt]."

In the responding letter, Mr Draghi said he was "fully aware" of the role being played by Irish citizens in enduring austerity measures imposed through the budget.

"The performance of the adjustment programme has rightly won praise and…Ireland continues to progress towards a successful conclusion of its programme," he wrote in his response of January 29th.