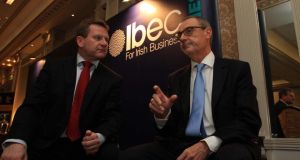 A new “business model” for the European Union is needed if the bloc is to continue to flourish while an exit by the UK would leave it a “diminished world force”, the EU’s new ambassador to the United States said in Dublin last night.

Speaking at the Ibec annual lecture in Dublin, Irishman David O’Sullivan, who recently landed the plum diplomatic posting to Washington DC, said the EU is at a “critical moment in its integration history”.

“I hope the new leadership of the EU, which will be elected in the coming weeks, will seize the opportunity to agree a policy agenda commensurate to the challenge. Business as usual is not the option.”

He said it would be a “historic misfortune” if the UK continues to drift in the direction of exiting the EU.

A “big challenge” will be to promote policies to stimulate growth and create jobs. He said Ireland had done “remarkably well” in managing the economic crisis but “needs to stay the course and reach a sustainable balance between spending and revenue”.

He said the three components of a new EU economic policy for the next five years should be: ensuring the sustainability of public finances; making structural reforms at national level to ensure the competitiveness of the individual member states and of the EU as a bloc; and using trade liberalisation as a means for driving the reform agenda and for allowing businesses, especially SMEs, to get access to third country markets.

Mr O’Sullivan noted that 90 per cent of the world’s economic growth will be generated outside Europe over the next 20 years. “Hypothetically, if we were to complete all our current trade negotiations tomorrow, we could add €275 billion [2.2 per cent of current GDP] to the EU’s GDP and generate 2.2 million jobs [1 per cent of current workforce],” he added.

The EU has concluded trade deals with South Korea, Central America, Colombia, Peru, and Singapore, and is finalising a deal with Canada.

He said concluding a trade deal with the US offered a “once-in-a-generation opportunity to strengthen what is already the greatest economic corridor in the world adding significantly to GDP and employment growth on both sides of the Atlantic”.