Engineering, IT, sales and finance roles among full-time positions on offer at new office 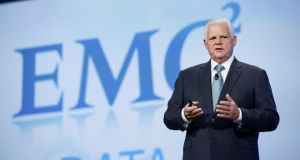 Global technology company EMC, which is the world’s biggest maker of storage computers, is to create 200 new jobs in Cork as part of a €100 million expansion programme.

The full-time positions, which span engineering, customer support, sales, finance, research and development and IT, will be based in a new EMC office in Mahon, Co Cork. The new office is scheduled to open this August.

EMC has already begun recruiting for the new positions and expects to have the majority of them filled by the end of 2013.

The jobs announcement was made this morning by Taoiseach Enda Kenny and David Goulden, EMC’s president and chief operating officer as part of an event celebrating the US company’s 25 years in Ireland.

Mr Kenny praised the creation of the “high value jobs” as a sign of EMC’s “laudable” commitment to Ireland, saying the data and cloud giant is “making a valued contribution to Ireland’s economy and our recovery”, before adding that EMC’s focus “on cloud and big data aligns well with the Government’s Action Plan for Jobs”.

The expansion will be supported by the Department of Jobs, Enterprise and Innovation through IDA Ireland.

IDA chief executive Barry O’Leary said EMC is a central player in Ireland’s IT cluster, adding the IDA was keen to support the company’s growth, particularly in cloud and big data.

“The jobs are a strong signal to the international investment community that Ireland is a centre for innovation and leading-edge business activity.”

EMC established a presence in Ireland in 1988 with its first manufacturing facility outside of North America in Ovens, Cork, followed by sales offices in Dublin (1990) and Belfast (2005). The Cork facility is the largest manufacturing site of EMC outside of the US.

The announcement of the new roles comes despite a recent report from non-profit training agency, Fastrack to IT (FIT) which warned of a “severe” shortage of skilled applicants in the ICT sector in Ireland, which has led to up to 4,500 vacancies in the area.