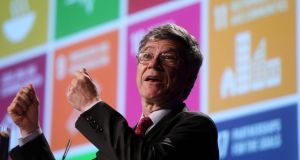 Columbia University economist Jeffrey Sachs: suggested the €13 billion in back taxes which Apple has been ordered to pay Ireland by the European Commisison belonged in the US. Photograph: Jason Clarke

He said the tech giant was just one of several US multinationals to receive preferential deals from the Irish State and that Ireland’s policies stood as a barrier to establishing an open and transparent global system.

Prof Sachs, who acted as an economic adviser to Bernie Sanders in the recent Democratic primaries in the US, was in Ireland to receive the UCD Ulysses medal, the university’s highest accolade, in recognition of his work in promoting greater humanitarian action to combat poverty and climate change.

Before receiving the award, he spoke at a sustainable development event hosted by Business in the Community Ireland.

Prof Sachs said Apple had avoided US corporate taxes through “a sleight of hand” that made it look like its profits were earned in Ireland and that the Irish Government had “played along with this game”.

The Columbia University economist also suggested the €13 billion in back taxes which Apple has been ordered to pay Ireland by the European Commisison belonged in the US, where the company’s intellectual property had been created, in some cases with the assistance of public money.

While he stopped short of criticising the Irish Government’s decision to appeal the Commission’s ruling, he said Ireland’s contrivance with Apple and others was neither acceptable nor admirable.

“Ireland has played heavily in tax arbitrage and from a narrow Irish perspective I don’t blame Ireland for doing it because it has reaped certain national benefits but from a systemic point of view of an international, honest, transparent system, Ireland’s policies should not stand the way they do right now.”

Prof Sachs said there was now strong pressure in the US to cut corporate tax on foot of reductions elsewhere, but this would only result in a race to the bottom. “If we go down that road we’re going to end everywhere at zero.”

Prof Sachs, who is special adviser to UN secretary general Ban Ki-moon on the UN’s sustainable development goals, also spoke about the breakdown of consensus politics in the US and Europe and the rise of Donald Trump.

He said the single biggest factor behind Mr Trump’s success and support for Brexit in the UK was immigration.

Noting the share of migrants in the US and Britain has risen from about 5 per cent of the population in the 1960s to 15 per cent now, he said: “The reason I view that as so decisive in this story is that even the Scandanavian countries, where inequality is very low, all have right-wing anti-immigrant populist parties.”

Prof Sachs, however, criticised left-wing parties for failing to grasp the issue and accept the need for controls.

He also highlighted soaring rates of income inequality and miserable social policies as factors which had “entrenched a lower class” in the US.

An outspoken critic of Hillary Clinton’s foreign policy and her apparent closeness to Wall Street, Prof Sachs said he would, however, vote for the Democratic nominee as a means to block Mr Trump.

However, he warned the incoming Clinton administration would be on a “fiscal knife edge” from the get-go and that the country risked bankrupting itself with another costly war in the Middle East, noting the US has spent €5 trillion on the post-911 wars in Afghanistan and Iraq.

“There’s definitely in the US mainstream a hawkish foreign policy community that believe America has to run the world, that it has to have primacy, that the military has to be unchallengeable, and that kind of thinking is really, what in other contexts, is called imperial overstretch.”

On global efforts to tackle climate change, Prof Sachs said: “We don’t have plans that are serious, consequent, deep enough and science-based enough to solve this problem right now and governments seem to be incapable of mobilising those plans.”

He was also critical of Ireland’s energy policy, describing it as empty. “There’s no content to it. It’s a bunch of generalities with no strategy, no specifics, no technological ideas.”