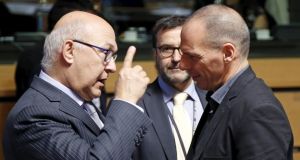 The European Central Bank has agreed to raise the cap on emergency funding for the Greek banking sector according to reports.

The decision comes amid increasing concerns about the health of the Greek financial sector after ECB president Mario Draghi told Thursday night’s eurogroup meeting that Greek banks might not open on Monday. Deposits, which have been steadily exiting Greek accounts since political uncertainty was sparked in December with the announcement of a Greek general election, have continued to seep from Greek banks this week, amid reports that up to €1 billion may have been withdrawn yesterday. The Bank of Greece issued a statement this morning stating that the Greek banking system remains stable.

Meanwhile, Greek prime minister Alexis Tsipras said today that he believes a solution will be reached in the Greek crisis as he welcomed the EU’s decision to convene an emergency summit of euro zone leaders on Monday evening.

The Greek prime minister, who is due to meet Russian president Vladimir Putin today during the second day of his two-day visit to Russia, said in a statement this morning that the euro zone summit is a positive development on the road toward a deal.“All those who are betting on crisis and terror scenarios will be proven wrong.There will be a solution based on respecting EU rules and democracy which would allow Greece to return to growth in the euro” he said.

With focus now turning to whether a technical deal can be secured over the weekend in advance of Monday’s eurogroup and EU summit in Brussels, European Commission president Jean-Claude Juncker said he expects to speak to Greek Prime Minister Alexis Tsipras this weekend. A spokesman for the European Commission president said Mr Juncker had spoken with German chancellor Angela Merkel and French President Francois Hollande by phone this morning. Euro zone finance ministers will also meet in Brussels on Monday ahead of the leaders’ summit to consider any deal that is presented.

Earlier in Luxembourg , British Chancellor of the Exchequer George Osborne said Britain had “taken measures” to increase economic security adding that preparations must be made “for the worst.”.

“We have entered the eleventh hour of this Greek crisis and we urge the Greek government to do a deal before it is too late.We hope for the best, but we now must be prepared for the worst,” he said.

In a sign of hardening opposition from a number of eastern European countries to more concessions for Greece, Slovakia’s Prime Minister said this morning that Greece must “do its homework. “We wish for Greece to remain in the euro zone but not at any cost,” said Prime Minister Robert Fico.

“Slovakia is prepared mentally and technically for the crisis scenario of Greece exiting the euro zone. We will insist on Greece doing its homework.”

Greece is under severe pressure to agree to a new reform package ahead of Monday’s meeting after a eurogroup meeting ended without agreement on a new deal for Greece on Thursday evening.

Amid fears that the deeply indebted country is lurching inexorably towards default, finance ministers from across the European Union, including Michael Noonan, said that a ‘Plan B’ of Greek default was now actively been considered, ruling out any further concessions for Greece.

A defiant Greek finance minister Yannis Varoufakis told reporters after the meeting that Greece had presented a comprehensive proposal “to end the Greek crisis once and for all” but this had been rejected by creditors. “We’re dangerously close to a state of mind that accepts an exit,” Mr Varoufakis said.

While EU economics commissioner Pierre Moscovici said lenders was “ready to work day and night to get the agreement that Greece and the whole of Europe needs,” he stressed that the EU had already made significant concessions, particularly in terms of primary surplus targets.

In a sign of the deepening acrimony between the two sides, IMF managing director Christine Lagarde called on Greece to come forward with “tangible, deliverable measures” and said that dialogue needed to be restored with ”adults in the room.” Eurogroup chairman Jeroen Dijsselbloem said the Greek government had been elected “to look out for the future of their people.”“We need politicians that are prepared to tell the truth to their people.”