As Germany benefits from openness, it fears China’s supply chain will devour its technology 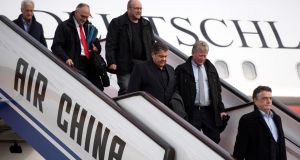 Normally feisty but fruitful, trade relations between the European Union and China have become decidedly scratchy – as the two sides argue over knotty trade issues, ranging from Chinese steel dumped in Europe to accusations of unfair market access for foreign firms into the world’s second largest economy.

There have been a series of high-profile investments into Europe by Chinese companies, such as the purchase last year of the Irish aircraft lessor Avolon Holdings in a deal worth €6.5 billion, but EU firms complain the traffic is all one way.

Last year, Chinese investment into the EU jumped 44 per cent to €20 billion – double the amount invested by Europeans in China. Organisations such as the EU Chamber of Commerce in China have long complained of the lack of playing fields.

Speaking in September, the lobby group’s president Jörg Wuttke warned on market barriers in China, saying: “There is a small, rocky pathway to China [for foreign investors] and an autobahn from China to Europe.”

The biggest beneficiary in Europe of growing openness in China has been Germany but, increasingly, Germany fears the supply chain in China will devour its technology – a stated aim in Beijing’s state economic plans. The Mittelstand, the collective term for the medium-sized firms on which German affluence is built, is under threat from the rising China.

“Germany sacrifices its companies on the altar of free markets while, at the same time, our own companies have huge problems investing in China,” Germany’s minister for economic affairs and energy, and vice chancellor, Sigmar Gabriel said in Berlin last week, ahead of his five-day trip with 60 business executives to China, which has been an eventful one.

Business-class flights on the numerous Lufthansa flights to Europe from Beijing and Shanghai are full of returning auto industry executives; schools catering to the children of German expats are full; and other international schools are offering German-language tuition to meet the shortfall in places. Chancellor Angela Merkel has visited nine times.

However, there are cracks growing in a relationship which is the envy of Europe’s other big economies such as France and Britain – and indeed Ireland – and Germany’s approach to China has taken a decidedly different turn.

Berlin has withdrawn permission for a Chinese company to purchase semiconductor company Aixtron, and has reopened a review of the €670 million deal it initially approved around two months ago.

Also under review is the planned acquisition of lighting manufacturer Osram by a consortium of Chinese buyers for more than €400 million.

And, perhaps most tellingly, Berlin has intervened to halt the takeover by Chinese home appliance giant Midea of the German robot maker Kuka, a national champion in Germany’s determined efforts to hook up machinery to the internet, citing security concerns.

The joint Sino-German Economic Committee is normally a forum for tough talking about German companies seeking to broaden their access to the Chinese market and, while there is a fair amount of horse-trading, normally both sides come away happy.

At this week’s event, however, China’s minister for commerce Gao Hucheng failed to show up – in what seemed to be a significant snub, given the Chinese were hosting the event. So, Gabriel cancelled his appearance.

China’s deputy economics minister Gao Yan filled in for the absent Gao Hucheng but she did not apologise for the minister’s absence, complaining instead of an “anti-investment mood” in Germany.

China’s anger at the Germans’ clampdown was clearly outlined in an article in the state-owned English-language newspaper China Daily.

“For years, the EU has been the global champion of free trade, multilaterism and advocating global solutions. But it is now challenged by multiple existential crises, EU policymakers have been trying to put out one fire to another, and thus they have started to look inward and are failing to give enough attention to the future,” the editorial ran.

If the EU wants “stronger and more sustainable European integration, it should not seek protectionism or isolation” it said. The EU Commission responded with a statement, saying the China Daily article on the EU, and its relations with China, contained “factual inaccuracies”.

The China Daily granted right of reply to the EU ambassador to China, Hans Dietmar Schweisgut, but then came back with a heavily edited version of his article “essentially changing the meaning of our ambassador’s words and saying if we did not accept their editorial changes then they would not publish it”.

In the uncensored version, Schweisgut said claims that the EU had forgotten its role as champion of free trade and open markets and reduced its international engagement, particularly in its relations with China, were untrue.

“The EU wants a China which is economically more open and stable, with significantly improved market access for foreign companies, as well as a level playing field for fair competition and without discrimination against our commercial actors. Otherwise, EU businesses cannot but conclude that the business climate for them in China continues to deteriorate,” he wrote.

The tennis match was warming up.

China’s foreign ministry spokeswoman Hua Chunying responded, pointing out that European investment in China was much larger than the volume of Chinese investment to Europe.

“Germany has more than 8,000 companies in China while there are less than 2,000 Chinese companies in Germany,” she said, urging Schweisgut to make an “objective evaluation” on China’s investment environment.

When Chinese officialdom uses the word “objective” – it is code for anger at what Beijing perceives as an attack, and a warning there will be repercussions.

Economic competition is the inevitable result of China’s economic rise which has intensified the fundamental tensions in EU-China economic relations, according to Björn Conrad of the Berlin-based Mercator Institute for China Studies.

“From the EU perspective, China’s state-led economic system and intense industrial policies are undermining the rules and principles of fair competition and open markets. Subsequently, Chinese trade and investment practices have come under heightened scrutiny within the EU,” Conrad told The Irish Times.

A number of Chinese investments in European hi-tech companies are part of a political strategy, steered by the Chinese government and financed through state-sponsored funds and investor networks.

“China wants to accelerate its technological catch-up not only by investing heavily in R&D [research and development] at home, but also by acquiring core technologies abroad,” he said.

Addressing the issues complicating China-Germany relations head-on will cause some disturbance in EU-China relations, Conrad says, “but it would be short-sighted to play these fundamental tensions down in order to safeguard short-term business interests. In the long run, Europe will not be able to avoid these conflicts in any case. European policymakers will have to face these unpleasant but inevitable confrontations, better sooner than later”.

On Chinese social media, the reaction has been one of disappointment, coupled with calls for China to stop buying everything, but rather learn from Germany’s innovative prowess.

“The whole world is taking precautions against China, but China is taking precautions to its own citizens,” one commentator called “Qianze” wrote on Weibo – a hugely popular social media platform in China – while someone with the handle “Fatty Qu” said: “Maybe Gabriel is here to discuss how to withdraw the money from China and send them back to Germany”.

A netizen called “Wenwu” wrote: “We should learn the professional spirits from Germany rather than just buying all-out” while another commentator called “Beijing Netizen” said Germany’s professional skills originated in its well-rounded education system – “German innovation comes from its complete vocational education, which is where China is lacking.”

Gabriel has never shied away from addressing China’s human rights record, and has regularly met activists and raised the issue with Chinese partners.

During his visit this week, the German minister added to Chinese irritation by meeting nine human rights activists at the German embassy, including Sakharov Prize winner Hu Jia, Chen Guiqui, the wife of a jailed lawyer, and writer and blogger Murong Xuecun.

Such meetings go unreported in China and take place within the discreet confines of the large German embassy compound on Dongzhimen Outer Street, and have never led to friction with the Chinese.

China’s default reaction to foreign criticism of its human rights record is to say it is a domestic issue and point to its progress on improving access to education and lifting people out of poverty as examples of its success within a broader definition of human rights.

What matters to the Chinese is trade and, like all gifted traders, Beijing is happy to play EU countries off against each other if needs be, to secure the most beneficial conditions it can.

This can also mean playing the EU off against the United States, or it can mean taking different bilateral approaches to different partners.

This week, for example, in a gesture which highlights how the EU is a long way off acting as one when it comes to bilateral trade issues with China, France’s visiting foreign minister Jean-Marc Ayrault seemed to undermine Gabriel’s sentiment as he plugged French business links with the world’s second largest economy.

“Do not be afraid of foreign investment but, at the same time, we must ensure that our investments are not hindered” in China, said Ayrault, calling for greater “reciprocity”.

Ayrault was praising the imminent creation of a fund to finance joint projects in third countries, which was announced by François Hollande during his visit to China in November 2015.

China’s foreign minister Wang Yi responded to Ayrault saying: “We know that we must improve the environment for investment,” pledging that “the door to China will be increasingly open to foreign investment” and describing the trend as “inevitable”.

Looking forward, there is a more conciliatory tone coming out of Beijing.

Premier Li Keqiang spoke of the momentum in the development of China-Germany ties. Ultimately, he said, common interests between China and Germany far outweigh the differences.