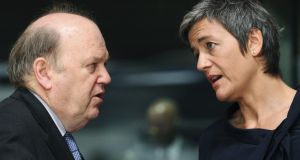 EU competition commissioner Margrethe Vestager has refused to rule out further state-aid investigations into Ireland’s tax arrangements with multinationals, as the Government intensifies discussions with Brussels about the tax it must reclaim from computer giant Apple.

In an interview with The Irish Times, the Danish commissioner said her staff were assessing about 1,000 tax rulings from across Europe, up to 300 of which are understood to be from Irish tax authorities.

Ms Vestager defended her record Apple ruling, saying it was “fact-based”. She said the commission was well aware of the forthcoming appeal by the Government and was “very prepared” for the case.

The Attorney General is preparing an appeal to the European Court of Justice of the EU Commission’s finding that Apple benefited from up to €13 billion in illegal state aid. It is expected to be filed within the next three weeks.

Under EU rules, the Government must outline to the commission how it intends to recoup the money within two months of the decision, with the alleged unpaid tax to be paid by the end of the year.

While the commission has estimated that the bill could be up to €13 billion plus interest, some analysts suggest that the final figure could be closer to €11 billion.

Efforts to meet next week’s deadline are taking place as the commission prepares to relaunch its controversial common corporate tax base next week, the latest stage in the EU’s clampdown on tax avoidance.

As EU leaders gathered in Brussels yesterday, Taoiseach Enda Kenny briefly met Theresa May on the margins of the summit. In her first visit to Brussels as British prime minister, Ms May was under pressure to reassure leaders about her approach to Britain leaving the EU, after she appeared to back a “hard Brexit” in a speech to the Conservative Party conference.

1 Tax and the Pandemic Unemployment Payment: Your questions answered
2 Charlie Chawke plans 290 apartments and hotel on Goat pub site
3 Four things that could help Ireland escape from the Covid-19 recession
4 Row over ownership of Fota Island resort comes before High Court
5 Brown Thomas and Arnotts shoppers will be able to book time slots for entry
6 Revenue fears fraudsters tapped bank details of 3,000 taxpayers
7 College of Surgeons faces legal challenge to Na Fianna GAA contract
8 O’Leary casts unwelcome light on a very Irish political compromise
9 Enforcement proves the Achilles heel for GDPR
10 Joint accounts: if one of us dies, can the other access the money?
Real news has value SUBSCRIBE