Only question is how bad it will be, analysts say

Mark Paul and Joe Brennan look at how Brexit will affect the Irish economy.

Governor of the Bank of England, Mark Carney, confirms that they are prepared for the 'leave' vote and will use an extra 250 billion pounds to help markets. Video Reuters 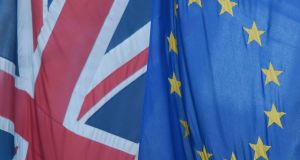 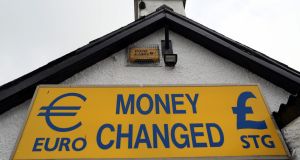 A ‘money exchanged’ sign pictured at the Border between Newry in Northern Ireland and Dundalk in The Republic of Ireland. The Department of Finance estimates are that the hit to Ireland following a Brexit could be 1.6 per cent of GDP by the end of next year. Photograph: AFP

The decision of UK voters to leave the European Union has opened up new economic risks for Ireland, and means considerable uncertainty over our key forecasts.

In the immediate wake of the vote, the focus will be on the market turmoil. But beyond that, the UK vote to exit the EU throws doubt on the future shape of our trading relationship with a country with which we trade some €1.2 billion of goods and services each week. The Minister for Finance Michael Noonan played a straight bat on Friday, highlighting the strengths of the economy and its growth rate, but his officials will be warning him that his Budget figures may need to be revised, depending on how this plays out. The room for tax cuts and spending increases in the October Budget, estimated at €1 billion in this week’s Summer statement, could quickly shrink.

Exporters to the UK now face a price shock, assuming sterling stays weak, and the risk of more to come, along with a threat to growth in the market they are selling into,which many forecasters now feel is heading for a recession. If sterling’s fall is maintained - it was down more than 5 per cent against the euro on Friday - they will either have to try to hike their prices in the UK, or cut their euro earnings.

This will hit jobs and growth. SME exporters, who will not have the same sophisticated currency hedging as their larger counterparts, are likely to be particularly exposed.Enterprise Ireland, the state agency responsible for indigenous industry, has said it will do what it can to help exporters to diversify into new markets and help them in the UK, but there is only so much it can do.

Imports from the UK, meanwhile, should fall in price, meaning falls in the price of many consumer foods, and in UK retail chains. One downside is that this will increase competition for Irish companies competing with UK imports.

Brexit will be a big hit to the tourism sector, as UK tourists are our biggest customers - at more than three million visits a year - and will find their pound does not go as far as it did.

The second key area of financial market activity for Ireland will be the government bond market. By threatening to set off another leg of the European financial crisis, Brexit could drive money out of peripheral markets such as Ireland and into core markets such as Germany. This could increase our cost of borrowing, albeit from historic lows, though ECB buying in the market could help.

On Friday there was no major impact on our bond prices, though some market analysts fear selling could hit next week, Meanwhile the NTMA underlined that it has raised almost €6 billion of its annual target of €6 -€10 billion and has a cash pile of €10 billion in reserve. In other words it can ride out any short-term market nervousness.

There was however a heavy hit to the financial sector, with the share prices of all the banks falling dramatically, sharply cutting the value of the remaining State stakes. The plans to float off some of the State’s AIB shares next year will be firmly on hold, as well be any investigations of a merger partner for Permanent TSB. The Central Bank said it was confident that appropriate contingency measures are in place in Irish banks, but the financial sector is now back in focus.

Beyond that, the risk to Ireland comes from an expected hit to British, European and world economic growth. Davy’s senior economist Conall MacCoille said he now expected the UK to enter recession, but that, on balance, the Republic should avoid the same fate. However he said growth here would suffer, costing 1- 2 per cent of GDP in 2016/17, and that the fall in sterling would bring initial problems for exporters. The Department of Finance has estimaed the hit to Ireland from lower growth worldwide, on the basis of UK treasury forecasts, could be more than 1 per cent of GDP by the end of next year, with future risks if sterling remains weak.

A key issue from Brexit is the longer-term uncertainties it creates and the potential impact on investment. This includes the wider geo-political impact on the EU and the euro zone. There are also a host of questions over the future trading and economic relationship between Ireland and the UK. If the UK pushes ahead and leaves the EU, it is likely also to leave the single market. So, a new trading relationship will need to be negotiated between the UK and the EU, a key strategic issue for Ireland.

Will there be tariffs - special trade taxes - between Britain and Ireland? Will there be a land border on the island? What about the free mobility of people from Britain to work in Ireland and visa versa?

PwC managing partner, Feargal O’Rourke, pointed out on Friday that Irish firms may need to reassess their supply chains and routes to market , and could face awkward changes in tax. He said a number of companies were now developing a range of business options depending on how the negotiations panned out, and that some might put investments on hold until there is more clarity.

Industry groups said they hoped that clarity would emerge on these issues as quickly as possible. But with complicated negotiations due with Europe first on the terms of the UK’s exit, when the new trading relationships might be sorted out is anyone’s guess.

There may also be economic pluses for Ireland. There have been indications, for example, that banks and financial service companies could move from the UK, to secure an EU base. But on the flip side, Britain could become a more aggressive competitor for investment, cutting corporate tax further,

The overwhelming opinion of analysts is that the balance for the Irish economy will be negative. The only question is by how much.