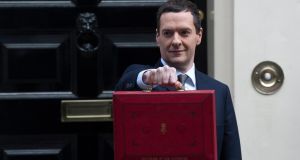 The British chancellor of the exchequer George Osborne lowered his target for a future budget surplus and announced higher economic growth forecasts as he sought to show voters that the country’s recovery is entrenched.

Mr Osborne, in his annual budget statement to parliament on Wednesday, said he was aiming for a sharply lower budget surplus by the end of the decade than the target he announced just over three months ago.

With an election only seven weeks away which opinion polls show is too close to call, the finance minister moved to prick the opposition Labour party’s charge that he was planning the harshest spending cuts in generations. “We choose, as the central judgment of this budget, to use whatever additional resources we have to get the deficit and the debt falling,”

Mr Osborne told parliament. “This is a budget that takes Britain one more big step on the road from austerity to prosperity,” he said.

The chancellor has been handed an unexpected windfall by a plunge in global oil prices and falling inflation since his autumn statement, giving him some leeway to pursue a less aggressive savings plan.

The budget surplus is now projected to stand at £7 billion in 2019/20, way below the £23 billion surplus he was aiming at late last year. Britain’s independent budget forecasters said at the time of the previous forecasts that to reach the target, public spending would need to fall to its lowest share of GDP since the 1930s. Labour’s leadership has used that comparison to back up their accusations that Mr Osborne is pursuing an ideological drive to shrink the state.

Mr Osborne said Britain’s economic growth in 2015 was forecast to be 2.5 per cent, up from the 2.4 per cent seen in December and said living standards would be higher this year than when he took office in 2010. That was squarely aimed at another Labour charge that ordinary people are not feeling the benefit of economic recovery.

Growth in 2016 is now expected to be 2.3 per cent compared with 2.2 per cent in the December forecasts, he said, citing projections from Britain’s independent budget forecasters.

“We are seeing a truly national recovery,” he said. “Britain is working again.”

The growth forecasts remain more modest than those of the Bank of England which has predicted Britain’s economy will grow 2.9 per cent this year and in 2016.

Mr Osborne had stressed in the run-up to the budget that he would not indulge in pre-election gimmicks and would stick to his priority of bringing down a budget deficit which remains one of the biggest among the world’s rich economies.

He said Britain was due to see its national debt peak in the current tax year, a year earlier than previously forecast. “We will end this parliament with Britain’s national debt share falling,”

Mr Osborne said. “The sun is starting to shine - and we are fixing the roof.” With the Conservatives and Labour deadlocked in opinion polls ahead of the election May 7th, Mr Osborne is under pressure to ease the squeeze on households whose inflation-adjusted earnings remain below their level at the 2010 election.