Brexit: Markets braced for ‘extreme volatility’ ahead of vote 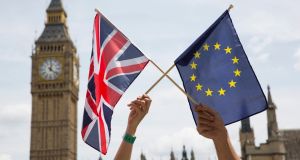 Financial markets are bracing themselves for a week of extreme volatility, potentially culminating in a major sell-off, if Britain votes to leave the EU on Thursday, according to investors.

Anxiety about the vote contributed to more than $1 trillion of value being wiped from global equities last week. Concerns over Brexit was also cited as one of the key reasons in the US Fed’s decision to hold off hiking rates last week.

Sterling and bond yields ended the week on a slightly more positive note as traders speculated the killing of a pro-EU MP Jo Cox may change the balance of opinions in Britain ahead of the vote.

While markets are expected to remain volatile up to the referendum, Friday, the day after the vote is likely to be the busiest trading day of the year as fund managers adjust their positions to the result of the vote.

Should the British vote to leave the EU, shares could fall sharply, but a decision to remain will not necessarily result in a big rally, because of other economic worries pertaining to the health of the global economy. “We are still stuck in the churn,” said Jeff Morris, head of US Equities at Standard Life Investments in Boston.

Separately, it has emerged Britain’s share of global merger and acquisition activity has tumbled to a record low, as deal-making freezes amid the uncertainty over the referendum.

The volume of deals involving UK targets is down almost 70 per cent this year compared with the same period in 2015, with the $57.6 billion spent on transactions accounting for only 4 per cent of worldwide M&A.

“For many authorities, there’s still a great temptation to buy time with money that one doesn’t have,” Mr Schäuble said at an award ceremony at the Institute for the World Economy in Kiel, Germany. “Fiscal and monetary policy measures have reached their limits,” he said.

1 Columbia Sportswear defies gloom with first Irish standalone shop
2 Ireland faces 'deep downturn' this year and may not rebound until 2024 if there is a second wave
3 How much do Irish people earn? And what will Covid-19 do to our wages?
4 EY prepares for backlash over Wirecard scandal
5 ‘The rental situation stops me moving back home’
6 Brexit: System agreed for Irish goods to skip checks on UK trade
7 Second Covid-19 outbreak and no-deal Brexit an appalling vista
8 Could your old car be giving away all your secrets to its new owner?
9 Why are markets booming when a crash is on the way?
10 Restaurants file court actions against insurers over lockdown losses
Real news has value SUBSCRIBE