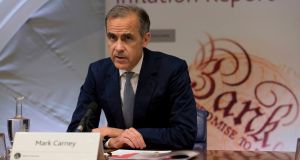 The long-term outlook for the UK economy is positive, according to the governor of the Bank of England, but he said growth was slowing in the wake of the Brexit vote.

Mark Carney said Britain was transitioning from “strong growth to something less than that”, while individuals and businesses across the nation were grappling with heightened uncertainty posed by the UK’s changing relationship with Europe.

“We had expected in August that the economy would slow materially during the second half of this year, relative to relatively strong growth in the first half of this year,” Mr Carney said in an interview with Herald Scotland. “Broad brush, that is what we are seeing.

The Bank held interest rates at 0.25 per cent this month, but signalled another cut is still on the cards later this year despite a Brexit bounce in the economy.

The Monetary Policy Committee (MPC) slashed the cost of borrowing for the first time in seven years in August from 0.5 per cent to 0.25 per cent and delivered an emergency package worth up to £170 billion to ward off recession.

The World Trade Organisation has also warned that world trade is forecast to expand at its slowest pace since the financial crisis.

However, the Bank governor said global growth was in a better place than during the financial crisis of 2008.

“The global economy is in a stronger position. We are not in a global economic crisis. We are in a situation where it is modest growth, but it is growth.”

He added that the UK economy had seen softening in business investment and in the real estate market.

However, he said: “At the same time, the consumer is holding up. In the middle is the housing market, where there are mixed signals.”