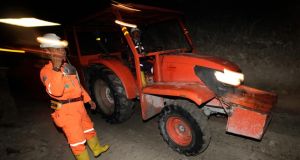 A worker drives a mining vehicle past a colleague at the PT Aneka Tambang gold mine in Indonesia. A survey of almost 500 business leaders on their attitudes towards doing business in the Asia Pacific region picked Indonesia as the region’s leading investment area. Photographer: Dadang Tri/Bloomberg

Chief executives in the Asia Pacific region are upbeat on the prospects for revenue growth over the next year, with 42 per cent saying they were “very confident” of higher revenues in the period, compared to 36 per cent last year. Almost 70 per cent said they would increase investments in the region, according to a study by PricewaterhouseCoopers (PwC).

The study, Towards Resilience and Growth: Asia Pacific Business in Transition, surveyed almost 500 business leaders on their attitudes towards doing business in the region.

Looking to the longer term, 52 per cent said they were confident of growth over the next three to five years, which is about the same as in 2012. The most popular investment pick among the chief executives was Indonesia, followed by Burma, China, Philippines, and Vietnam.

Expanding middle classes were given as an obvious attraction for investors, while ample natural resources drew others.

“But these aren’t the only qualities that can set the stage for business investment. Increasing transparency, youthful populations, relative wage costs, infrastructure plans and political stability were frequently cited as important qualities that create ‘room to grow’,” a manager at Litiko said.

The report was released last week at a meeting of the Asia Pacific Economic Cooperation (APEC) in Bali, Indonesia.

“Executives in the Asia Pacific region are in the midst of a major transformation within the region, driven by a gradual but steady rise in income and economic opportunity for millions of people,” said Andrew O’Callaghan, a partner in PwC Ireland China Practice.

“This is good news for Ireland. These positive trends should result in increased opportunities for Ireland’s export sector as Irish businesses look to expand markets in the Asia Pacific region,” he said.

Some one in five chief executives is pursuing mobile-enabled products and services such as transactions, while the business leaders said developing broadband network and urban transport would help to push economic growth.

In line with similar surveys in the region, business leaders identified inconsistent regulations and standards as the single biggest barrier to their company’s growth in the Asia Pacific region.

“CEOs do have concerns about regulatory and legal barriers, and want to speed up progress on trade negotiations which, if successful, could unleash an even greater wave of new investment and help secure CEO confidence in the region,” Mr O’Callaghan said .

The survey was carried out between June and August this year and covered 478 chief executives and industry leaders in all 21 APEC economies.

APEC is an economic organisation in the Asia-Pacific region which aims to boost economic growth in the region by encouraging greater co-operation and by expanding trade and investment.