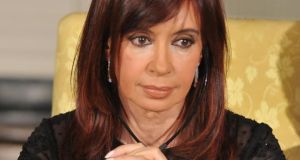 Cristina Fernández de Kirchner, the Argentinian president, raised the prospect of a new sovereign default in a national address yesterday. She said her government would never succumb to “extortion”, after the US Supreme Court rejected her country’s petition to reverse a legal ruling by a lower US court that forced Buenos Aires to pay holdout creditors.

Does the court’s decision mark the end of the so called “debt case of the century”? Almost. It means that a 2012 ruling by New York District Judge Thomas Griesa remains intact. This verdict said that if Argentina continues payments to creditors who participated in two debt restructurings in 2005 and 2010, then it must also pay the full value of the bonds held by creditors who refused to take part in the deals. These are the so-called holdout creditors, led by NML Capital, a subsidiary of Elliott Capital Management, a hedge fund controlled by US billionaire Paul Singer.

Why doesn’t Argentina pay everyone and move on? Of Argentina’s original $95 billion default, about 93 per cent of creditors participated in the restructurings. Buenos Aires says that leaves roughly $15 billion of bonds, including unpaid interest, in default. At stake in this case is a smaller sum: about $1.5 billion of debt held by NML and its partners. Argentina can meet that payment, but, with only $28 billion of foreign reserves, it cannot afford to pay the $15 billion owed to all holdout creditors at the same time.

What options does Argentina have now? Four, broadly. It could refuse to pay NML, but that would also trigger an automatic default on the exchange bondholders who participated in the restructurings. This would set back Argentinian moves to regain access to international capital markets, such as its recent settlement with Paris Club creditors. That is a high price to pay as Argentina needs fresh loans to develop its shale gas reserves. Indeed, yesterday Ms Fernández swore Argentina would continue to service restructured debt.

Second, it could continue to refuse to pay the holdouts, while maintaining payments to exchange bondholders. However, that would require rerouting payments outside New York, where the exchange bonds are settled. Logistically that is near-impossible, especially as the next payment, some $400 million, is due on June 30th.

Third, it could comply with Judge Griesa’s ruling, and pay NML and its partners $1.3 billion now. However, that would open up Argentina to being sued by the exchange bondholders. That is because, until the end of this year, under a legal clause, they are entitled to claim any better terms voluntarily offered by Argentina to other bondholders.

That leaves a fourth option: reach an agreement with NML to settle its debts, probably by issuing fresh paper, but not until 2015 when the need for Argentina to offer similar terms to exchange bondholders expires. This seems the most likely option.

What are the international implications of the case? So far, none. There has been no market fallout. However, some, including the IMF, worry that the case will make future debt workouts harder as it removes the incentives for creditors to participate.

Against that, most international bonds now have collective action clauses, which make a repeat impossible as it requires bondholders to accept majority decisions.