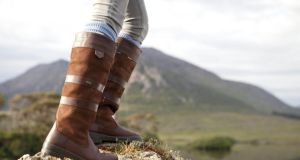 Climate conditions in Sweden “are appropriate for the products we sell: waterproof and breathable boots”.

Look closer at the well-heeled Stockholm crowd and you might notice something familiar: the Galway Boot from Irish company Dubarry.

The Ballinasloe company had sold into the Swedish market for 20 years through local distributors and earlier this year it established Dubarry Scandinavia.

The Galway firm is just one of many Irish companies pushing into a prosperous market that, despite some challenges, offers rich rewards.

Dubarry was always confident its products were a good fit with the outdoor Swedish lifestyle and began by focussing on the sailing sector.

Marketing manager Michael Walsh said it was an obvious move given Sweden’s 3,000km coastline and obsession with boats. Now the company is also enjoying a rise in sales for its “country lifestyle products”.

“The Swedish market was of interest to us because of their high disposable income and their climate conditions are appropriate for the products we sell: waterproof and breathable boots,” said Mr Walsh.

Mr Walsh said Sweden has proved a very easy place in which to do business, with straightforward partners and no serious language barrier.

Dubarry Scandinavia has its own sales team for Sweden, with products distributed from a warehouse in the Netherlands. The company also sells direct at Swedish outdoor events such as horse shows.

As well as being fashion-conscious, Swedes have a reputation for being Europe’s earliest adopters. That has been a blessing for innovative Irish company Sonru, developer of an automated video software for screening job candidates.

Several prominent Swedish companies are now clients although only Volvo is willing to admit it in public.

Sonru founder and chairman Edward Hendrick is complementary of the iconic company and the Swedish market in general, which he says was an obvious target market given the local love of innovation and efficiency. “A system like Sonru . . . was an obvious tick-box for them – straight away they get it,” he said.

He says his company has not experienced any serious stumbles over cultural gaps, though having a Danish member of staff helped them understand cultural differences, like Swedes’ love of long holidays.

Sonru is very complementary of Enterprise Ireland in helping open the door to foreign markets. Nordic region manager John Roche says the attractiveness of Sweden as a gateway to the region is clear given the wide use of English, easy access and political stability. Sweden has seen steady economic growth of 2.2 per cent in the last decade, well ahead of the rest of the EU.

He does, however, pint to its non-euro status and the country’s spread-out area. He also says the culture of consensus decision can lead to a relatively long decision-making.

Irish-born Sweden-based business consultant Charles Jameson says Irish people need to adapt to this Swedish timescale. Doing business successfully involves focusing your message during meetings and following up on the phone. And he warns that Swedes’ apparent fluency with English should not be taken for granted. “Irish speak quickly, often in metaphors. When they are presenting Irish companies often forget to condense and simplify.”

He says Swedes marry German and Dutch directness with Japanese discretion. “They will never say you’re wrong nor will they say no,” he says. As a result it can be difficult to gauge interest.