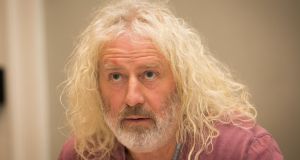 Cerberus got a judgment against the Mick Wallace in January, although the order was stayed for several months. Photograph: Gareth Chaney/Collins

Independents4Change TD Mick Wallace and Cerberus have clashed several times over the past 18 months since the politician first challenged the vulture fund’s €1.6 billion purchase of Nama’s Northern Ireland loans.

Mr Wallace first highlighted allegations that business and political figures were to benefit from the deal, now known as Project Eagle, in the Dáil in mid-2015.

His statements sparked a controversy that led to an inquiry by the Dáil’s Public Accounts Committee (PAC) as well as investigations in the UK and US.

Following the High Court hearing on Monday at which Cerberus subsidiary Promontoria Aran had him declared bankrupt on foot of a €2 million judgment, the Wexford TD pointed out that since 2014, the US company has bought Irish property loans on which thousand debtors owed a total of €20 billion.

“But I am the first they bankrupted; it hardly takes a rocket scientist to work out why,” he said.

Since 2015, Mr Wallace has continued to use Dáil privilege to highlight various allegations linked to the deal.

He stressed that it was several weeks after he first raised the Project Eagle controversy that he learned that Cerberus had bought his €2 million debt, along with hundreds of others, from Ulster Bank in early 2015, giving it the right to right to pursue him for the money.

In 2009, Mr Wallace personally guaranteed €2 million that his company, M&J Wallace borrowed from Ulster Bank to help pay for the construction of apartments in Inchicore and Dominick Street in Dublin.

As ACC Bank put the company in receivership in 2011, it was unable to repay Ulster, which left Mr Wallace liable for the €2 million guarantee.

Cerberus began its action a year ago. It got a judgment against the TD in January, although the order was stayed for several months.

In early November it began bankruptcy proceedings against him. The High Court adjourned them until this week to see if he could work out a settlement with a personal insolvency practitioner.

Mr Wallace pledged to continue pursuing Cerberus. He also dismissed any suggestion that he was disappointed not to be still in business now that property and construction are recovering. “There’s no point in giving out about it, that’s business,” he said.