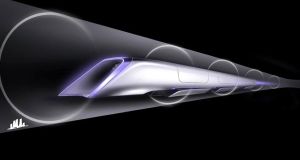 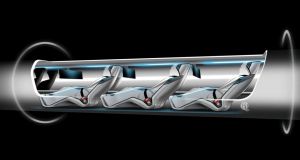 An unearthly sounding man called Elon Musk has delivered the world a 57-page document. It details the “Hyperloop”, a magnificent mode of transport to overtake planes, trains, boats and cars. Battling against friction, resistance and other gravitational forces, the invention would transport you speedily by pod within a long tube.

Devised as a traffic solution for California, the Hyperloop would get you from LA to San Francisco in 35 minutes, hurtling along at 760mph.

Two parallel tubes (one for each direction) would sit on earthquake-tolerant pylons every 100ft. With 25 co-passengers per pod, you’d get there in one-quarter of the time and at one-tenth of the cost of the existing high-speed train proposal, slated for 2029 delivery.

The Hyperloop plugs into something primal and imaginative: there is a jet-pack joy to its transit and it comes preloaded with appeal. Why settle for just another track-shackled train? All aboard!

“Musk’s proposal is very clever. The Hyperloop idea, or something similar, has been around for a number of decades but it takes a promoter of proven stature and vision like Musk to highlight its potential to a wider audience,” says Conall Mac Aongusa.

As managing director of Cork-based consultancy Transport and Innovation Ltd, he specialises in research and technology innovation in transport systems.

A co-founder of electronic payments solution PayPal, Musk has form. “Hyper” suggests speed, frenzy and the imaginative leap of links, the stepping stones of internet search that lead you to explore unexpected avenues; “loop” suggests the agility of aerial pilots, but also a seductive craziness. Musk has developed electric cars and sells 20,000 of them a year, and SpaceX, a commercial space rocket firm.

“When someone that innovative comes out strongly with a new disruptive idea on transport, people pay attention,” says Mac Aongusa.

At every bus stop, there are running-late fantasists slouched against Lucozade adverts imagining cars that run on spittle, planes made out potato skins and turbo-charged pogo-sticks. How robust is Musk’s concept?

Cushion of air
“Most of his ideas seem sound and don’t appear to go against the laws of physics,” says Bill Reddington of the DIT school of manufacturing and design in Bolton Street. Reddington has steered teams through the manufacture of single-seat racing cars for the Formula Student competition in Silverstone.

“For supersonic speeds, you need to fly very high, where the friction created by air is small. This doesn’t make sense over distances less than 600 miles. The problem is overcoming friction between the vehicle and the mechanism supporting it, be that road or track. Musk’s idea is to reduce this friction by accelerating the train through a pod on a cushion of air.”

Musk betrays a childhood wonder when he describes the Hyperloop as gliding on air like a table-hockey puck. “Ideally the train would be accelerated through a vacuum, but trying to maintain a vacuum over such a long distance where you could get leaks at seals would be impossible,” says Reddington.

“He proposes generating very low pressure within the tube. This low pressure would reduce the friction but, at such high speeds, you would still get a build-up of pressure in front of the train, which would slow it down.”

Think of the pressure within a syringe if the tip was blocked. How would Musk beat this? “By placing a fan on the front of the train and blowing most of it out the back. Some of the air is blown down underneath the train, which helps support it on a cushion of air. The extra air needed to support the pod comes from onboard compressors driven by solar-charged batteries.”

Mac Aongusa sees the Hyperloop as belonging to a lineage of world-altering ideas on transport: “I don’t believe it is outlandish – no more so than the helicopter, invented by Leonardo da Vinci in the 16th century, or the Channel Tunnel, proposed over 100 years before it was built.

“The French TGV system revolutionised rail services in Europe in the 1970s and 1980s, in the same manner the Shinkansen bullet trains did in Japan in the 1960s. Incumbent transport providers are always resistant to change and disruptive competitors.”

Away from the techno-politics and monopolistic interests that might block the Hyperloop’s adoption, what might it mean in a European context?

“Paris to Berlin is just inside the 900km limit suggested. You could link cities together in loops,” says Gareth Kavanagh, secretary of the European Science Fiction Society and chairman of the OctCon science fiction convention in Dublin on October 12th and 13th. “So Lisbon, Madrid, Toulouse, Paris and Berlin could be done. Imagine travelling with your car from Lisbon to Berlin in less than five hours. I would love to see something like this tried.”

Security sucker punch
Concorde was a serious leap. But research and development made the end-product prohibitively expensive – it was always only for the wealthy. “As we know from projects like the Port Tunnel, the final costs often greatly outweigh the initial estimates,” says Reddington. “Another possible problem would be the large g-forces generated.” And security may deliver another sucker punch: “Would it be an easy target for terrorists?” he asks.

Kavanagh is a fan of the fictional draw of the Hyperloop. He reads value into its scale. “We seem to have entered an age where big projects don’t happen. If you look at the 1950s and 1960s, all the way up to the 1980s, there was talk of going to the moon and Mars, of things like Concorde. Then came the 1990s and the 21st century, when we got caught up in the cost of things, in terms of money and human lives.” This grim realism turned our feet to clay and focused transport innovation on less glamorous leaps – cue real-time schedules, invisible toll booths and environmental concerns. So is the Hyperloop too big for us? Conall Mac Aongusa thinks so. “It’s highly unlikely something of this scale and ambition would work in Ireland. The population and market is too small. Apart from the lack of money, there is too much inertia in the system of existing Government-backed transport providers to engage with change on such a revolutionary scale.”

But Kavanagh is flicking through two yarns – Harry Harrison’s A Transatlantic Tunnel, Hurrah (1972, on building a transatlantic tunnel) and Arthur C Clarke’s Rescue Party (1946, featuring a vacuum train). He offers the philosophical insight of a fiction reader: “Just because a project fails to meet its goals does not mean it does not have value. Science is about trying things and learning from the results. If we want to be better, we first need to try . . . I hope someone attempts the Hyperloop, as we seem to be in a world that has stopped dreaming.”