The Docklands Business Awards recognise businesses operating in the area 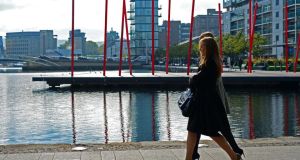 Developing the Dublin docklands into a maritime tourism destination could deliver 1,200 jobs and €36 million investment, Ciaran Flanagan, chairman of the Docklands Business Forum, has said.

Speaking in advance of this week’s Docklands Business Awards, he said there was an “unprecedented opportunity” for Dublin’s communications and financial hub to become a major international tourist destination. He pointed out that the European Commission had identified maritime tourism as a key growth area and cited reports indicating that multi-occupant yachts spend an average of €1,000 a night.

“By better utilising the area on the east bank of the river Liffey and around the Grand Canal Basin and developing it into a world class luxury yachting destination, we could bring about €36 million into the local economy and create more than 1,200 new jobs,” he said.

The Docklands Business Awards, which will take place in the Gibson Hotel on Thursday, recognise the achievements of businesses operating in the area, but also drive further innovation and development in the docklands.

Awards will be given across a range of categories including innovation, professional services, business of the year and corporate social responsibility. Nominees at this year’s awards include Accenture, which is nominated in four different categories, Facebook, CHQ, Jurys Inn, Google, LegalShine and Dogpatch Labs.

“The awards are a key platform to highlight the activity and innovation taking place in the Docklands area but also an important forum to underline the potential the area still holds to drive economic development and growth,” Mr Flanagan said.

Elsewhere in the docklands on Thursday, the Irish Computer Society (ICS) Leaders Conference is taking place in the Marker Hotel.

The conference will examine the changing face of the workforce and IT consumers, developing the next generation of IT leaders and megatrends in mobile, cloud and social media.

There will also be a masterclass on cybersecurity from Kevin Hogan, vice-president of global security response office at Symantec.

1 Michael O’Leary is the boss you want to lead an airline out of crisis
2 Ireland is in danger of losing the woods for the trees on emissions reduction
3 High Court told FBD staff texts discussed policies in ‘disparaging terms’
4 Estée Lauder staff at Dublin airport plan further strike action
5 Irish company to test vaccines on volunteers deliberately infected with Covid-19
6 Air travel never going ‘back to way it was’
7 The wealth of the Irish – how do your assets match up?
8 Online shopping makes town centre jobs unviable, says Next boss
9 Workvivo to create 100 new jobs in Cork as business booms
10 Fortnite owner signs multimillion deal to buy Irish ‘kidtech’ firm
Real news has value SUBSCRIBE