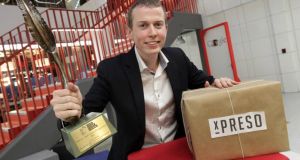 The search is on for Ireland’s best young entrepreneurs, with the deadline for applications closing this Friday.

The competition has a total prize fund of €2 million, with €50,000 awarded through every Local Enterprise Office, €20,000 of which will go to the “Best Established Business” winner. Another €20,000 investment fund is on offer for the “Best Start-up” winner locally, with €10,000 on offer to the “Best New Idea” winner.

Three winners will be chosen by every Local Enterprise Office, and they will progress at one of eight regional finals in October, with the national final taking place in December to announce Ireland’s Best Young Entrepreneur for 2015.

The Action Plan for Jobs initiative is aimed at entrepreneurs aged between 18 and 30, and the overall winner – Ireland’s Best Young Entrepreneur – will receive an investment of €50,000.

“Focussing on job creation, the competition is open to everyone with their own business or innovative ideas for a new one,” he said.

Mr Keane co-founded the parcel tracking software company in 2013 after dropping out of his PhD studies and has already signed up Ireland’s biggest independent courier company.

Mr Gammell now employs 32 people in Kinnegad and used his investment prize fund to expand his group booking software business into the UK.

Regional winner, Shane Byrne of Wicklow-based mobile app development company Showoff, recently signed an international contract and has doubled his workforce to 14 since entering the competition in 2014.

“To help young entrepreneurs refine and improve their business plans and proposals, expert mentoring on a one-to-one basis will be offered through the business bootcamps,” she said.