Advice from a dragon: think big

Peter Casey: ‘You have to think and absolutely believe that you can rock it out of the ballpark’ 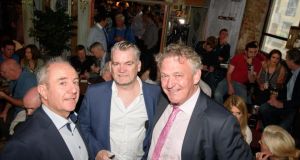 Entrepreneur and Dragons’ Den star Peter Casey says he experienced a few major pitfalls in business, which caused him to go broke, twice.

Mr Casey, founder and executive chairman of global recruitment business Claddagh Resources, had lost a substantial amount of money in a skylight business and in the Australian property market.

“I’m a compassionate capitalist who’s been burned many times,” he told the audience at the AIB Start-up Night in Letterkenny, Co Donegal.

He said the first mistake potential businesspeople make is not “thinking big” enough.

“You have to think and absolutely believe that you can rock it out of the ballpark. You’ve got to think big. It’s absolutely critical,” he said. He advised people to “jump in, have fun and don’t fear failing”.

“You can’t fear failure. Part of the learning curve of being successful is that you’ll have to fail. You’d worry less what other people think about you when you realise how seldom they do.”

Mr Casey said would-be entrepreneurs need to be passionate about their ideas, understand their competition and make cash flow a priority.

“Everybody talks about cash flow being king,” he said. “A simple rule of thumb is double your expenses and halve your revenues.”

Next, limit your exposure.

“When you’re thinking of growing a business, write down what are the five or six things that could upset this whole thing. It could be as simple as getting divorced or getting sued. You might get ill.

“In all the business plans I’ve ever read, I’ve never seen people write things down that could go wrong or at what point you decide to throw in the towel.”

Next: “Don’t ever try to outfox the taxman. It’s a reason a lot of companies go broke. When you get audited, they go through everything in your entire life. I can’t even remember what I had for breakfast this morning. It’s just not worth it.”

He said he learned one of the most important rules from his father: there’s no right way to do the wrong thing.

“The more ethical your business is and the more you try to do the right thing, the more your customers will stay with you,” he said. “Do the right thing by your customers and your employees and you will stay in business for a long time.” AIB Start-up Academy: What’s it all about? The AIB Start-up Academy is a joint venture between The Irish Times and AIB to help people start or strengthen their businesses by providing information, networking opportunities and the chance to win a place on an intensive training course run by Irish Times Training.

AIB teamed up with The Irish Times to launch the inaugural Academy last year.

The 2015-2016 Academy involves a series of Start-up Nights, events across the country where industry leaders share their insights and experiences with entrepreneurs and people interested in starting their own business.

The nights, which run until November, connect entrepreneurs with like- minded people and the wider start-up community.

The academy also wants to find the top start-up talent in the country. Entrepreneurs can apply for a spot on the intensive, eight-week training course that begins in early 2016.